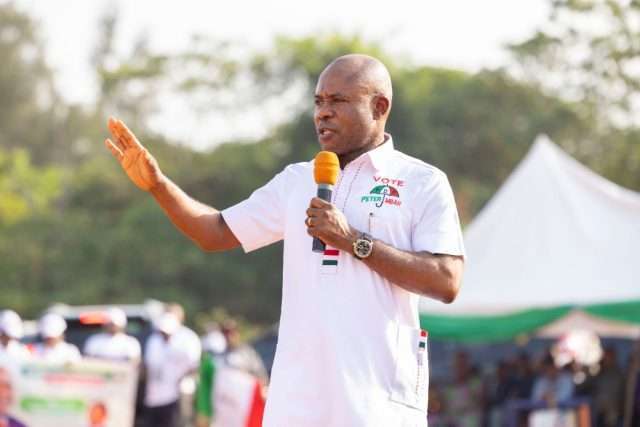 Enugu State governorship candidate of the Peoples Democratic Party, PDP, Dr. Peter Mbah has assured residents of the state of his resolve to address water scarcity in the state and promote rural-urban development through provisions of access roads, robust healthcare service delivery, quality education, and other social services within the next 4 years of his administration.

Dr. Mbah who said this on Thursday while reacting to the demands made by the people of Enugu South Local Government Area at town-hall meetings held at Obeagu – Amechi Uno and Ugwuaji, headquarters of Enugu South West and Enugu South South Development Centres, respectively, added that his government will run a system driven by equity, justice and fairness.

Noting that clean water is critical to a healthy living and good environmental sanitation, Dr. Mbah stated that the Akwuke water scheme and dam will be revamped to give water to the people of the council area.

He stressed that his team had already started discussing with the engineering company to see how the dam can be fixed and reticulate water across different communities.

Emphasizing on his inclusive economic blueprint that will promote industrialisation, provide jobs for the teeming youths and ensure a healthy workforce, the PDP gubernatorial flagbearer said that access road, special economic zones that will encourage growth and development will be executed.

According to him, all the link, feeder, rural and urban roads leading to business places including farmlands are exhaustively captured in his 10,000 kilometres of roads which will see his administration constructing over 1200 kilometres of roads yearly for the next 8 years, adding that Afoapu-Apasa road, Jim-Gariki road, roads in Awkunanaw, Obeagu-Amechi Uno, Ugwuaji, among others be considered for rehabilitation.

He further reiterated that plans to establish vocational and technical skills acquisition centres across the still that will equip the youths with the right skills of self-employability, availability of loans for traders and farmers to upscale production and turn dormant assets into productive assets have already been structured.

While addressing the issue of perceived political marginalisation, Dr. Mbah maintained that political inclusion, balance of development and equal redistribution of wealth and key positions in line with the spirit equity, justice and fairness will be accorded priority as no part of the state will be marginalized.

Speaking earlier, the people hailed the governorship hopeful for his people-centered and exceptional manifesto which, according to them, has brought hope and light to the state.

Commending the manifesto as a comprehensive initiative that will bring economic viability, infrastructural revolution, and uncommon transformation to the state, a stakeholder from Enugu South West development centre, Hon. Caleb Ani, insisted that Mbah is a divine project designed by God to give the state a new lease of life.

Appealing to Mbah to address unemployment, road deficit and marginalisation in the area, Ani expressed confidence that a new dawn was possible through the excellent opportunities afforded by the manifesto.

On his part, the member representing Enugu South/North Federal Constituency, Hon. Ofor Chukwuegbo said the revolution in infrastructure in their area had already commenced through the dividends of democracy his representation has been giving the people.

The ranking lawmaker stressed that some kilometres of road had been constructed and handed over to his constituents, promising that his constituency will partner with Mbah to deliver more development projects and upscale standard of living.

In their separate speeches, Hon. Sam Ngene, Barr. Chimezie Nkwuo, Hon. Chiene I Chiene, Hon. Romanus Ugwu, Hon. Dave Agbo Barr. Oke Edeh among others reiterated that the mammoth crowds at the town-hall meetings were impressed with the agenda of the governorship candidate for them, saying they’d queue behind his candidacy and deliver all their votes for him.