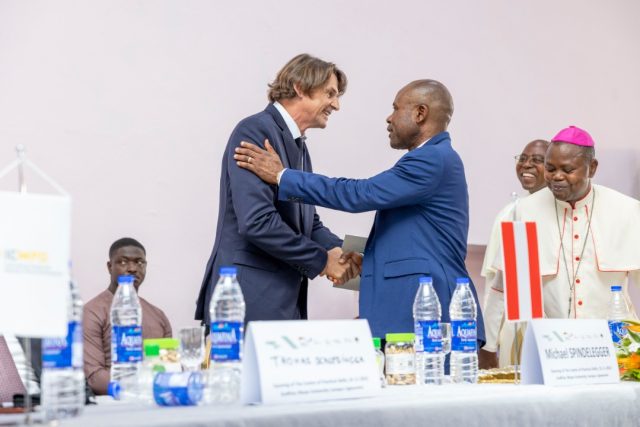 Governorship candidate of the Peoples Democratic Party, PDP, in Enugu State, Dr. Peter Mbah, has rallied foreign governments and investors towards the exponential growth of the state’s economy from the present $4.4 billion to $30 billion in eight years.

Mbah also said that his administration would make skills and vocational education compulsory for all indigenes and residents of Enugu State from the age of 12 to effectively address the challenge of unemployment and service the planned economic growth.

He made this known during the official opening of the Godfrey Okoye University–European Business Park and Centre for Practical Skills (CPS) at Ugwuomu, Nike, Enugu.

Speaking at the event, which had in attendance the Ambassador of Hungary to Nigeria, Mr. Thomas Schlesinger; Minister Counsellor of the Germany in Nigeria, Mr. Martin Huth; Country Director of the German Agency for International Cooperation, Mr. Markus Margner; Executive Secretary, National Universities Commission, Prof. Abubakar Rasheed; Bishop of the Catholic Diocese of Enugu, Most Rev. Callistus Onaga, among others, Dr. Mbah said the initiative was in sync with his plans catalyse skill and vocational education and de-risk investment inflow, and make Enugu State a preferred destination for investment, for business, and for living

He said: “My joy in being here stems largely from the fact that what we are doing here today is everything we had proposed in our manifesto to the people of. One of the ways to de-risk investment flows to Enugu stated is to work with centres like this because in our development plan, it is well captured that we are going to have a lot of skills acquisition, technical, and vocational education across many locations in the state.

“Our goal is that in the near future, this CPS and indeed the European Business Park would constitute one of the hubs for the emergence of small and medium scale businesses in our state.

“We have therefore proposed a humongous vision to the people of Enugu State that we are going to grow our economy from the current $4.4 to $30 billion. Such proposal was tagged as crazy when such proposal was made, the reason being that in the last 21 years, we have only marginally grown the economy, and here we are saying we are going to have an exponential growth from $4.4 billion to $30 billion in eight years.

“Again, we want to create an environment for private sector to thrive. So, we simply said that our mission is going to make Enugu State the preferred destination for investment, for business, and for living. So, we understand clearly that as a government, we are going to have to de-risk investment flow by the private sector into Enugu.

“We understand the need for businesses because we are also coming from that background and we know that skills and labour are one of the key indicators for the Ease of Doing Business in any community’, he stated.

He added that “Made-in-Enugu” products would serve both domestic and foreign markets and would address the problem of unemployment, eradicate poverty, and also create opportunities for investors to explore other areas such as the new energy and mineral resources sector his soon-to-be administration is exploring.

“We believe that with the establishment of a skills centre like this, our unemployment rate will drop drastically. We must ensure that this Centre is singled out for recognition because this is what we do hope to replicate as a government across different locations in the state.

He also lauded the management of the university led by Vice Chancellor of the Godfrey Okoye for its “doggedness and excellence” in the management of the laudable projects, assuring that his administration would continue to partner with institution to produce responsible, wealth-creating young men and women that will be useful to the world.

On his part, an international energy investor from Europe, Mr. Jens-Christian Moller, expressed confidence in Mbah’s ability to achieve the “ambitious $30 billion dollars economy”, adding that his company would be willing to invest in the state once he is elected.

He said the European contingent were interested in training Enugu people in Europe and bringing them back so that they could replicate the technical know-how and other skills in their home state.

Mr. Moller said what Mbah intended to achieve in the state was quite ambitious, but accomplishable, noting that it would take extra efforts to achieve seven times the current gross domestic product (GDP) in the state.

He said he was impressed listening to him marshal his blueprint, assuring that he would be partnering with the state under Mbah’s leadership once the right framework was made available.

According to him, they were ready to create thousands of jobs by engaging Enugu youth in vocational trainings, to be world-class engineers and help them work globally, especially in the area of electricity generation where they could live in Africa, pay their taxes in Africa and earn their income abroad.

In his intervention, the Danish Consulate General in Nigeria, Per Christensen said they had their corporate investments and activities in Lagos state and one in Northern Nigeria, stressing that with the right policies, they were willing to have one in Enugu State to serve the Eastern Nigeria as they had no corpprate investments in the region yet.

The Consul General further said he would be glad to come back to Enugu State if Mbah is elected to discuss further on how they could come in with their investments.

Speaking at the event, the Director-General of the International Centre for Migration Poicy Development (ICMPD), Dr. Michael Spindelegger, said that the CPS and Business Park opened in the university was a unique collaboration meant to bring together migration expertise, a local university and the private sector to open up prospects for the local population, business location and companies, in order to attract small and medium-sized enterprises to Nigeria with its large and growing market of over 220 million people.

Meanwhile, Monsignor Prof. Obiora Ike, who is also a professor of Ethics and Intercultural Studies at the Godfrey Okoye University, described Dr. Mbah as God-sent.

“Dr. Mbah is not a politician. He is a technocrat; and at certain points, we need a technocrat, who comes to salvage the society”, he stated.

Speaking earlier, the Vice Chancellor of the university said the programme was possible because of their uncanny innovation and commitment where they were able to transform a jungle to a Catholic University, and to a GO Uni-European Business Park and Centre of Practical Skills.