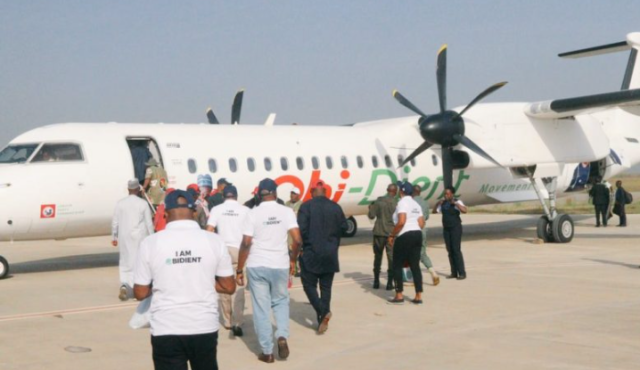 Labour Party (LP) campaign organisation says the aircraft it was meant to take for a rally in Oyo state was grounded by the “powers that be”.

Peter Obi, presidential candidate of the LP, and his entourage were heading to Ibadan, the Oyo state capital, from the Nnamdi Azikiwe International Airport in Abuja when the incident happened.

Diran Onifade, head of media for the LP campaign, in a statement on Wednesday, said the Obidient plane was grounded for “regulatory reasons”.

Onifade asked supporters of the LP to ignore “mischievous rumours” suggesting the plane had been impounded.

He said the party’s scheduled rally in Ibadan will proceed as planned.

“The Obidient plane was grounded today by the powers that be “for regulatory reasons” only. Please ignore any mischievous rumour. Our massive rally in Ibadan is going on as planned,” the statement reads.

Obi is one of the leading candidates for the 2023 presidential election alongside Atiku Abubakar of the Peoples Democratic Party (PDP) and Bola Tinubu of the All Progressives Congress (APC).

The former Anambra governor enjoys huge popularity on social media courtesy of a massive support base known as the ‘Obidients’.

The 2023 elections is less than 15 weeks away. According to the Independent National Electoral Commission (INEC), the presidential and national assembly elections will hold on February 25, 2023.

The governorship and state house of assembly polls will take place on March 11, 2023.