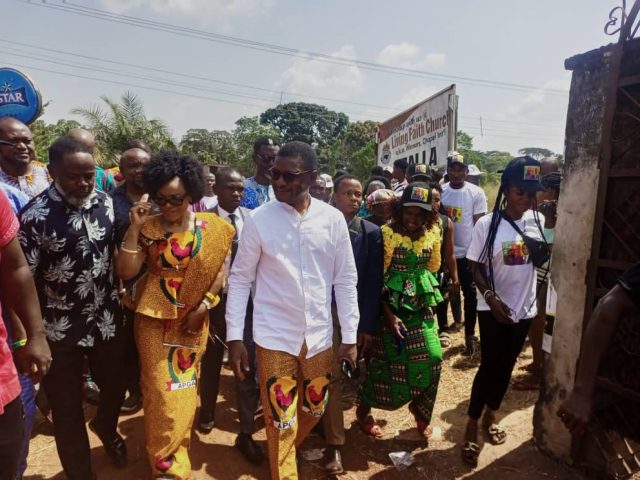 Enugu Gubernatorial candidate of the All Progressives Grand Alliance, APGA, Mr. Frank Nweke Jr. says his administration will prioritize the security and welfare of citizens of the state.

Addressing the people, Mr. Frank, stated his Commitment to bringing sustainable development to the state just as he did as Minister.

He reiterated that his government will keep it simple, by addressing the basic needs of potable water, security, and shelter.

The governorship candidate said his administration will be swift to address the challenges facing the community and the state.

The APGA flag barrier added that his government will create enabling environment for small-scale businesses to grow, by supporting petty traders.

He pledged to boost agriculture by empowering farmers with conventional farm tools and inputs.

The former Minister also said that his administration will subsidize health care by building and equipping general hospitals in communities across the state.

Mr. Frank urged the people of Akegbe-ugwu to vote for a candidate of proven integrity and experience who will bring the needed change in the state.

He said that his administration will make provisions for retirement homes and monthly stipends for the elderly.

Recounting some of his developmental strides as a three-time Federal Minister, Mr. Frank noted that he has created job opportunities for the youths, across all works of life, constructed some roads, and enhanced security in the area.