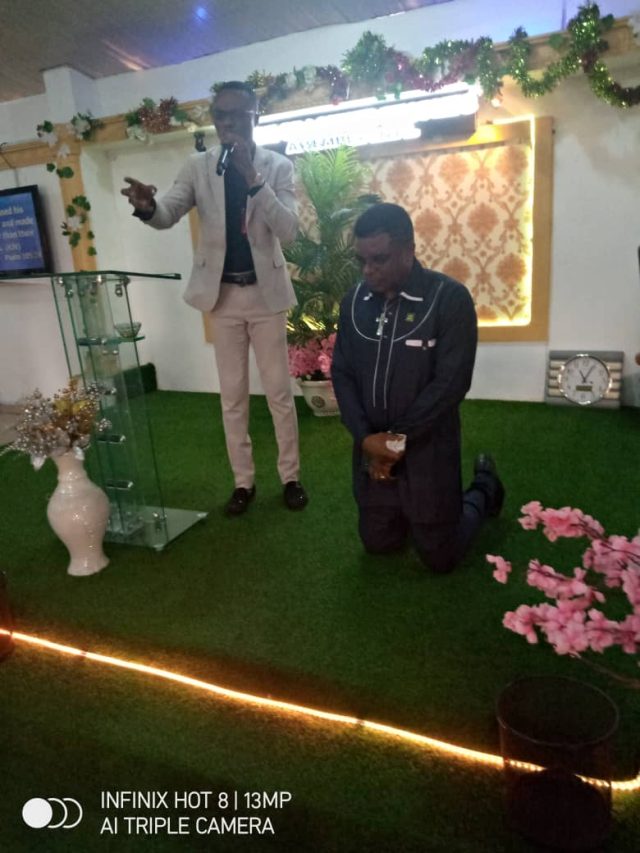 Perhaps, it is against the aforementioned notion that the church gained economic and political power from owning land and from members of the church serving in government positions.

This reporter observed that the project of the ADC flag-bearer, Pastor Ozoemena, to rule Enugu State in 2023 got a boost when members of the church declared massive support for him.

The Founder/Spiritual Leader of the Pentecostal Church, Rev. Pastor Marshall Chukwuma Agu, made their endorsement public when he received the ADC flag-bearer in his church at Independence Layout, Enugu during a Harvest/Thanksgiving service.

Pastor Agu described the ADC governorship standard-bearer, Pastor Ozoemena, as a true man of God, stressing that he left the pulpit to venture into murky water of Nigerian politics to liberate his people from bondage.

He told the worshippers that it is most appropriate to back Christians who have fear of God than political office seekers who are tyrants.

“Therefore, we as a church pray that the ADC governorship candidate, Pastor Donatus Ozoemena is given the grace to rule Enugu State in 2023”, he added.

The Cleric who is also a lawyer, noted that when a good leader emerges the people are happy, quoting Proverbs 29 verse 2 from the Holy Bible that
“when the righteous increase, the people rejoice,
but when a wicked man rules, people groan”.

Addressing the congregation, the ADC governorship candidate called for equality, fairness and justice in the governance of the people, saying he was commanded by God to leave his comfort zone overseas to come home and salvage Enugu State.

Pastor Ozoemena stated that successive regimes had not taken congnizance of the welfare of ordinary man in the street, stressing that it is time for the youths to take back their state.

“What appears to be a divide and rule system coloured with dictatorial tendencies should be stopped”, he added.

The ADC flag-bearer who emphasised that he was not in the church to campaign as it was against Independent National Electoral Commission (INEC) laws, went down memory lane, playing back with nostalgia his growing days in his country home Onoli, Awgu in Awgu Local Government Area of the state.

He told the worshippers that he was not born with golden spoon but out of providence, God has elevated him to his present status.

“I was born and bred in my community, Onoli, Awgu and I attended my primary school there. After my primary school, I went to Awgu High School and later to Government Technical College, Enugu I majored in Refrigerator and Air-conditioning. I later proceeded overseas where I excelled in the field.

“I have embarked on developmental projects assisting the less-privileged in provision of water and infrastructure. I have been sponsoring youth football tournament through the Save Enugu State Now Movement ( S-E-S-N-M) since 2019 and talented footballers discovered so far in the tournament are now plying their trade in Europe and Asia countries.

“I rejected God’s calls with several excuses but I was warned by God not to disobey Him. As a two-time ordained man of God, I had to follow God’s command by returning to Nigeria to join politics with a strong view to deliver my people.

“I have a message for you all here. The message is that God has answered your prayers. I am not promising you fish but I will teach you how to fish. Your weapon is your PVC. Use it wisely to enthrone credible leaders in 2023. Do not be deceived by antics of politicians who come to promise you that they will build heaven on earth.

“I have a 5-point programme that will reposition the state, revive the dwindling fortunes of the state and create youth empowerment.

“I will restore the trust in government by building a stable and prosperous state where people are economically empowered as well as have access to a stable power supply, potable water, excellent healthcare and quality education.

“It hurts my heart to keep seeing our youths in the predicaments you have been placed in today. The predicament of lack of hope for future, joblessness and insecurity, but l assure you that with God, there is great hope for you. With joint efforts we will be happy again, but it’s totally in your hands as we cannot keep doing the same thing over and over again and expecting different result”.

Indeed, there was a thunderous ovation in the church when Pastor Ozoemena knelt down at the sanctuary to receive special prayer and divine anointing from the host Pastor, a development many saw as a sign of humility.

It could be recalled that last month, Pastor Ozoemena in his desire to sensitize the people on civic responsibilities, embarked on similar voyage to St Paul’s Cathedral Youths Chapel, Potters House, Nsukka, where he
lamented that the youths are among the worst hit by the socio-economic and political challenges enveloping the nation.