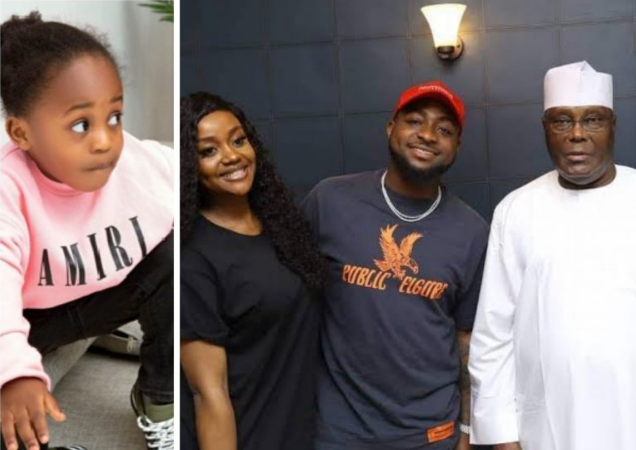 The presidential candidate of the Peoples Democratic Party, PDP, Alhaji Atiku Abubakar, has sent his condolence to David Adeleke, also known as Davido, and the Adeleke family over the death of their son, Ifeanyi.

Recall that Ifeanyi was said to have drowned in a swimming pool, leading to his untimely death late yesterday.

The spokesman of the Lagos State Police Command has confirmed that a preliminary investigation is currently ongoing to unravel what led to the boy’s death.

Meanwhile, Atiku has taken to his verified Facebook page to express his condolences.

He wrote: “My thoughts and prayers are with Davido and Chioma and the Adeleke family at this time. I pray for God to strengthen and comfort them”.

Davido, who is the cousin to Osun Governor-elect Ademola Adeleke, reportedly lost his son after he was drown in a poll in Lagos State.

A statement by Osun Caretaker Chairman of PDP, Dr Adekunle Akindele, expressed sadness over the incident and prayed with the family for God to console them.

“Following the death of Ifeanyi, all party activities are hereby suspended to commiseration with the family of Adeleke.

“We mourn the sorrowful exit of our son, Ifeanyi. We pray for the repose of his soul. It is a sad day but we remain steadfast in our faith in the Lord of the Universe.

“Our condolence goes to Davido, our youth ambassador. We commiserate with our father figure, Dr Deji Adeleke and the entire Adeleke family. We pray the good Lord grant the family the strength to bear this irreparable loss,” the statement reads.