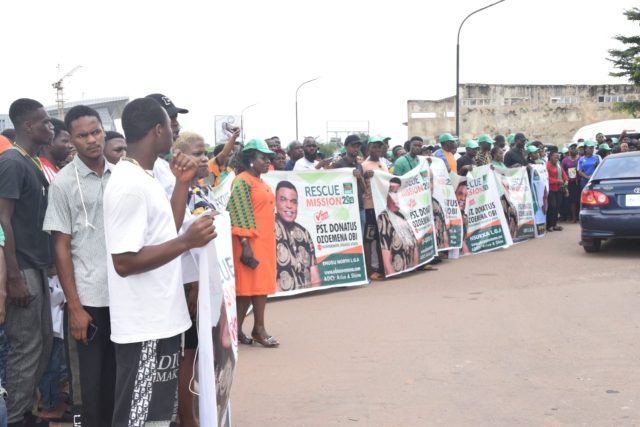 Grief, sorrow and gnashing of teeth took the centre stage in minds of many worshippers in Enugu State capital on Saturday when the African Democratic Congress (ADC) Gubernatorial Candidate, Pastor Donatus Obi Ozoemena, led his party faithful and other citizens to pray for victims of the 2020 EndSars protest in the state.

The prayer procession which was held at Michael Okpara Square, Enugu was organised by youths from all the 17 Local Government Areas of the state under the auspices of “Enugu Voice”, a pressure group.

It could be recalled that in October 2020, angry youths took to the major streets across Nigeria, demanding for an end to police brutality in the country.

The protesters also called for justice for victims of police violence and extra-judicial killings in the country.

Spontaneously as it were, the demonstrations started as a call for the disbandment of Nigeria’s Special Anti-Robbery Squad (SARS), a unit of the Nigerian Police Force that has earned notoriety for its brutality and human rights abuses.

Despite the fact that the authority at the centre swiftly responded to the demand of the youths by announcing structural changes to SARS, the human rights violations and exploitation continued unabated.

How the protest snowballed into a hurricane-like across the country and later got infiltrated by hoodlums before it was put to rest is now history.

But suffice it to say that after the demonstrations, Governor, Ifeanyi Ugwuanyi of Enugu State like his colleagues, constituted a nine-member Administrative Panel of Inquiry with a mandate to “investigate the loss of lives and/or other grievous bodily injuries to private citizens and security personnel”

Little wonder, residents of the Coal City in a 5000-man walk, came together last Saturday and prayed for remembrance of their beloved ones who were callously murdered during the protest in the state, two years ago.

The event proper started at 10 am with physical walk by the participants. They trekked round the Okpara Square praying for the repose of those whose lives were cut short by the EndSars upheaval.

Speaking at the event, the ADC Gubernatorial Candidate, Pastor Ozoemena lauded the leadership of “Enugu Voice” for organising the memorial prayer, stressing that the youths have woken up to take back Enugu State.

Pastor Ozoemena who could not hold his tears for the slain youths said, “I am overwhelmed with the turn-out of people to this place. The aim of this 5,000 prayer march held today in Okpara Square, Enugu is basically, among other things, to share grief, sorrow with families of EndSars victims and to offer prayers to the peaceful repose of the departed souls.

“The prayer procession held this morning is apt and timing because we are in a campaign period where politicians particularly political office seekers are going about wooing electorate, promising heaven on earth just to get their votes.

“EndSars protest which went wild across the country two years ago is not something we should cast into the dustbin of history or forget it in a hurry just like that. It was a dark period in Nigeria history. Some youths lost their lives. And it was largely caused by bad leadership

“We will not make change positively by violence. The democratic way to end the ugly trend is for us, you (the electorate) to shine your eyes, say no to money bag politicians and vote wisely in the ballot box for credible leaders to emerge in 2023

“The youth of Enugu State need to burn their skins over this unequivocally gathering. We need to change the status-quo for justice, equity and fairness to reign in every aspect of Nigerian life. I have offered myself as God commanded me, to come and liberate my people of Enugu State

“I have not yet unveiled my manifesto but it is good to know that I have realistic programmes to salvage Enugu State which has been ruined by successive regimes due to ineptitude and avarice.

It was observed that the ADC governorship candidate also used the opportunity to answer some questions thrown to him.

For instance, he explained to a female participant and indeed the audience that his domicile in Europe will be an added advantage to his gubernatorial race, pointing out that he would use his contacts in overseas to attract foreign investors to Enugu State which would go a long way in development of our state.

Reacting to the Saturday’s 5,000-man-prayer-walk, the Supreme Coordinator of the Save Enugu State Now Movement (S-E-S-N-M) football tournament, Rt. Hon.Okafor Onyeka Cyndian, said it was a wonderful outing, describing Pastor Ozoemena as a philanthropist who had used his humanitarian service to uplift many people in the state.

“His Excellency, Donatus Obi Ozoemena is natural. We should say no to hire purchase in leadership corridor as we experienced for 24 years in Enugu state”, Cyndian stated.

Indeed, it is not an overstatement to say that the October 29, prayer at Okpara Square led by the ADC gubernatorial candidate, Pastor Ozoemena, was significant in many dimensions especially now that the nation is on the threshold of electing another set of political leaders that would decide the fate of Nigerians.