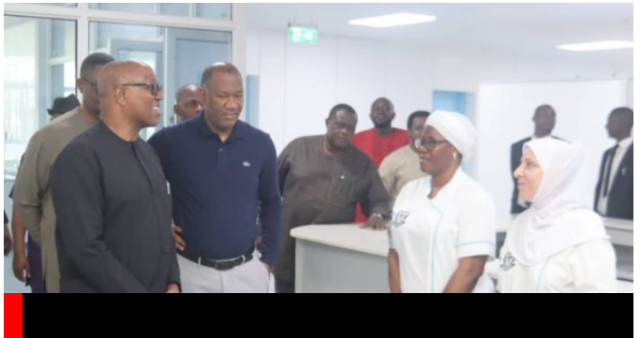 Obi had earlier on his Twitter page on Wednesday shared pictures from his visit to the Baze University Hospital, describing the varsity owned by Baba-Ahmed as exemplary.

According to him, The institution is exemplary and reflective of a centre of excellence, and what domestic entrepreneurs and investors can contribute to nation-building.

He wrote, “This morning, I had the privilege of visiting the Baze University Hospital in Abuja and inspecting the facilities. Dr Datti Baba-Ahmed was on hand to show me around.

This institution is exemplary and reflective of a centre of excellence, and what domestic entrepreneurs and investors can contribute to nation-building.

“With several more facilities like this, medical tourism for Nigerians will be a thing of the past. This is simply awesome. – PO.”

But reacting to the visit, Sowore said he was surprised that Obi visited Baba-Ahmed’s hospital rather than the ‘university teaching hospital’ he allegedly built during his tenure as Anambra State governor.

He wrote, “I thought you & Datti would be inspecting the international standard “University Teaching Hospital” they claimed you built while you were governor of Anambra state and not a private hospital built by Datti, which obviously is not accessible/affordable to majority Of Nigerians!”.