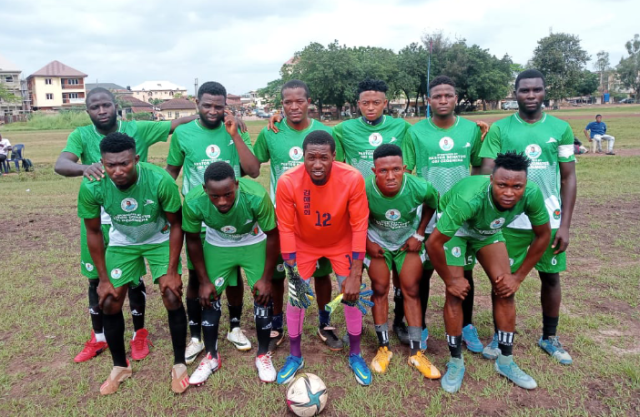 Igboeze North Local Government win over Enugu-East Local Government by 2-0 was a satisfying moment for the victors at Mestalla Ngwuo Park, stadium last Saturday as the team poised for more victories in the on-going S-E-S-N-M 2022/2023 Soccer tournament sponsored by the flag-bearer of the African Democratic Democratic Party (ADC) His Excellency, Pastor Donatus Obi Ozoemena.

From the blast of the whistle by the Centre referee, Enugu East mounted pressure on Igboeze North side, making them to retreat to their own half of the field of play.

Suddenly, Igboeze North woke up from their slumber and in their counter attacks forced Enugu-East to concede the first corner kick.

In an attempt for the Enugu-East goalkeeper to parry the ball, it slipped off his hands and bounced on the 18 yard box which a striker from Igboeze North utilized to put the round leather object behind the goalkeeper’s reach to register the opening goal.

What would made it 3 goal was denied by the woodwork as a powerful shot from Enugu North striker hit the upright post.

The first half ended in 2-0 in favour of Igboeze North Local Government team.

The second half saw both sides working hard to make amend and playing with caution, making the game less interesting. However, without the brilliant saves by the Enugu-East goalkeeper, the Igboeze North boys would have increased the tally.

Speaking to newsmen after the game, Rt. Hon. Okafor Onyeka Cyndian, Personal Assistant to the ADC Gubernatorial Candidate, commended the sponsor, His Excellency Pastor Donatus Ozoemena for repositioning sports in the state.

He called on the people of the state to support the cadidancy of Pastor Ozoemena as he means good for the masses.

He recalled that he has been in partnership with the ADC Gubernatorial Candidate since 2019.