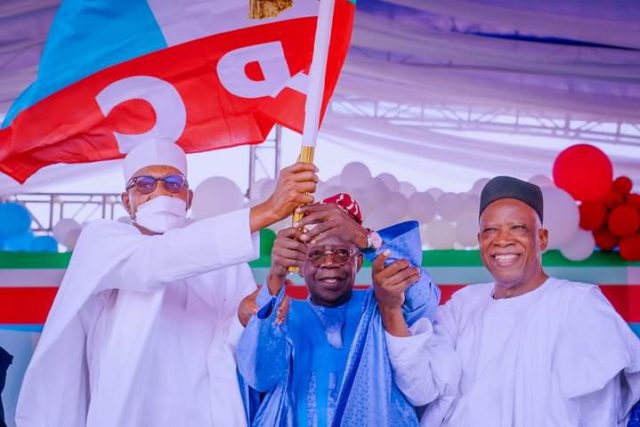 The Presidential Candidate of the All Progressives Congress (APC), Bola Ahmed Tinubu and other candidates of the party may maybe disqualified for the 2023 General Elections over violation of electoral act.

This is because of the recent judgement of a Federal High Court sitting in Abuja which nullified the nomination of Governor Isiaka Oyetola and his deputy governorship candidate, Benedict Alabi, for the 2022 Osun State governorship election.

According to the judgement, Governor Mai Mala Buni who submitted their names to INEC violated the provisions of Section 183 of the Constitution.

Ruling on the suit filed by the People’s Democratic Party (PDP)
challenging the nomination of Oyetola and Alabi, Justice Emeka Nwite agreed with the submission of the PDP on the grounds that Governor Mai Mala Buni who submitted their names to INEC violated the provisions of Section 183 of the Constitution of the Federal Republic of Nigeria and Section 82(3) of the Electoral Act 2022.

The court declared that Governor Mai Mala held dual executive positions as the Governor of Yobe State and the Chairman of the National Caretaker Committee of APC.

The provisions of Section 183 read in part: “The Governor, shall not, during the period he holds office, holds any other executive office or paid employment in any capacity whatsoever.”

According to legal opinions on the issue, the ruling in its current subsisting nature, means that all actions of Buni while in office as APC acting boss, stand invalidated.

These actions, include the signing of the nomination of Ekiti governor-elect Abiodun Oyebanji, as APC candidate for the June 18, 2022 poll in the state, the nominations of candidates for other outlier legislative polls, as well as the conduct of the party’s elective national convention which gave birth to the current NWC, among others.

The biggest threat posed by the ruling to APC, is the possible consequential disqualification of all its candidates for the 2023 poll, including the presidential ticket of Senator Bola Tinubu and Kashim Shettima, considering that Adamu’s NWC, conducted the primaries.