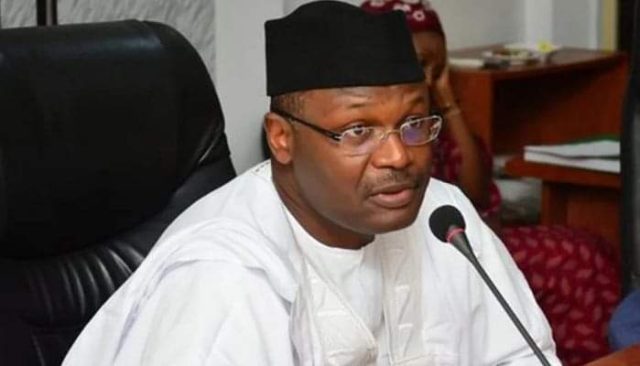 The Independent National Electoral Commission (INEC) has said that the winner of the 2023 presidential election must score the highest number of votes and the required two-thirds spread in the 36 States of the federation as contained in the Electoral Act 2022 and the 1999 Constitution (as amended).

LEADERSHIP reports that less than five months before the elections, no clear frontrunner has emerged with major candidates all confronting challenges on their path to the highest political seat in the Africa’s most populous country.

Two other candidates are challenging the dominance of the APC and PDP: Peter Obi of Labour Party, a former state governor generating a following among young Nigerians and another ex-state governor and former minister who is contesting under the platform of the New Nigeria Peoples Party (NNPP), Dr Rabiu Kwankwaso.

The national commissioner and chairman, Information and Voter Education Committee of INEC, Festus Okoye, who said this on Monday in Lagos at the ongoing two-day media capacity-building workshop on the commission’s progresses, innovations, preparations for the 2023 general elections and critical issues in the Electoral Act 2022, said there shall be a second election between the person with the highest votes and the person with the spread, but not necessarily the second highest votes scored.

He said, “By section 134 of the Constitution where there are more than two presidential candidates, for a presidential candidate to be declared duly elected, he must secure the highest number of votes cast at the election; and not less than a quarter of the votes cast at the election in each of at least two-thirds of all the States in the Federation and the Federal Capital Territory.

“In a governorship contest, the candidate must secure the highest number of votes cast and quarters of the votes cast in two-thirds of all the Local Government Areas of the State.

“In the event of a candidate not securing this threshold, the Commission must conduct a second election. Not all the 18 registered political parties sponsoring candidates will participate in this second election.”

Okoye said only two political parties and two candidates will be on the ballot for the second or runoff election if the need be.

He said the first will be the presidential candidate that secured the highest number of lawful votes in the federation.

The INEC commissioner said that the Electoral Act 2022 has validated the technological innovations deployed by the commission.

He also said that INEC has cemented the place of the Smart Card Readers/Bimodal Voter Accreditation System (BVAS) in the voter accreditation process, which was hitherto an administrative decision provided in the commission’s Regulations and Guidelines for the Conduct of Elections.

According to him, the Supreme Court applauded the introduction of the Smart Card Readers in the Electoral Process, particularly in the case of WIKE EZENWO NYESOM v. HON. (DR.) DAKUKU ADOL PETERSIDE & ORS (2016) LPELR-40036(SC).

“It must be appreciated from the outset that Smart Card Reader Machine or simply Card Reader (SCRM for short), is an innovation in our Electoral Process. It was not known, or rather, it was never put into practice before in our political development.

“Smart Card Reader Machine is designed to read information contained in the embedded chip of the Permanent Voter’s Card (PVC) issued by INEC to verify the authenticity of the PVC and also carry out a verification of the intending voter by matching the biometrics contained from the voter on the spot with the ones stored on the PVC.

“INEC’s motive, which became public in introducing the technologically-based device, barring any technical mishap, breakdown or malfunction, was to ensure a credible, transparent, free and fair election for the country,” Okoye said.

He said, “A political party, aspirant or candidate that contravenes any of the provisions of section (92) of the Act commits an offence and is liable on conviction in the case of an aspirant or candidate, to a maximum fine of N 1,000,000 or imprisonment for a term of 12 months; and in the case of a political party, to a fine of N2,000,000 in the first instance, and N 1,000,000 for any subsequent offence.

“A person or group of persons who aids or abets a political party, an aspirant or a candidate in contravening the provisions of section 92(5) relating to the employment of violence, commits an offence and is liable on conviction to a fine of N500,000 or imprisonment for a term of three years or both.
“Section 93 of the Act also prohibits the use of force violence during campaigns and prescribes still penalties for candidates, aspirants, or persons or group of persons that use force or compel the use of force during political campaigns.”