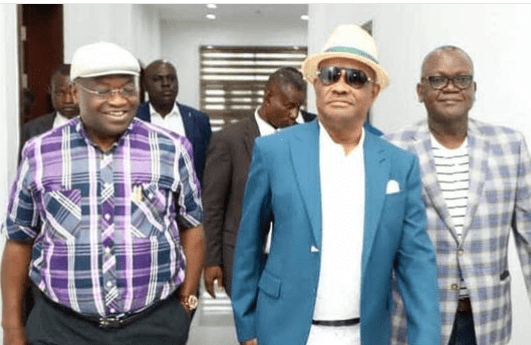 The PDP crises seem like it will continue as the two camps in the party have not come to an agreement.

The camp led by Nyesom Wike, Rivers state Governor, has now left for the United Kingdom again as Sources within the party say the Wike-led PDP chieftains are likely to meet with Bola Tinubu, APC presidential candidate.

Punch newspaper reports that they are expected to be joined by Oyo state governor, Seyi Makinde, who is currently on vacation abroad.

Wike and his team have been holding series of meetings outside the country.

There were insinuations that the governors would meet with the presidential candidate of the All Progressives Congress (APC), Bola Tinubu, in London, but this could not be confirmed as the former Lagos state governor was still in Nigeria as of Friday night.

Another source claim that everything is set for Wike camp to meet Obasanjo and Mr. Peter Obi, Presidential Candidate of the Labor Party [LP] in London with the aim of comparing notes and forming a formidable third force ahead of the 2023 General Electioms.

Vanguard newspaper reports that another PDP source said: “Unless a miracle happens, the reconciliation talks between Atiku and Wike have irretrievably collapsed.