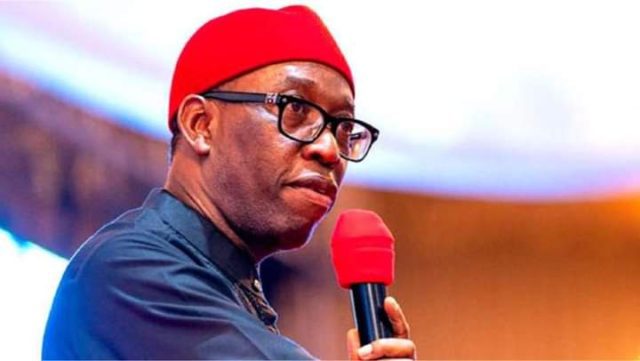 Vice presidential candidate of the People’s Democratic Party, PDP, Ifeanyi Okowa has dismissed criticisms that does not represent the South Eastern geo-political extraction of Nigeria.

Okowa, while speaking in an interview with Arise News on the The Morning Show, said he does not only represent the South-East, but also represents the South-South regions of the country.

The Delta State governor, who has been described by the PDP presidential candidate, Abubakar Atiku as a bridge between the South and North, stated that he has a root in the South-East and the South-South.

“The issue of the vice presidency has not been on the debate where it will go to is actually premised on the fact that when the presidential candidate emerges he looks for what possible zone and what person can work with me and what can be part of the team that can make us actually succeed in governing the people aright. I think that is what informed the decision,” he said.

He described Atiku’s emergence as the presidential candidate of the PDP as a good sign for the future of the South-East region.

“There are two geo-political zones that feel shortchanged; The North-East (where Atiku is from) and the South-East geo-political zone, because none of them, no son from these zones have actually been president of this nation. They obviously have a point and I believe that we sympathize with them.

“Because the next point in time what we will be talking about is that the South-East itself is the only zone that is left and they will lay claim to it,” he said.

Okowa, who noted that the unity of the country is the most important, said the priority should be given to building the nation and moving the country forward.

He described the selection process of the party’s presidential and vice presidential candidates as a good step in the right direction.