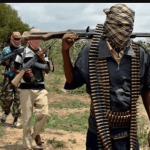 Zakari was said to be among those abducted by gunmen during attacks on the village including nine other villages raided by some in the early hours of Friday with a report of over 50 people killed while no fewer than 100 were abducted. The attackers also razed the Church.

The Chancellor, Catholic Diocese of Zaria, Patrict Adikwu Odeh in a press statement confirmed the incident as the church prays for his release.