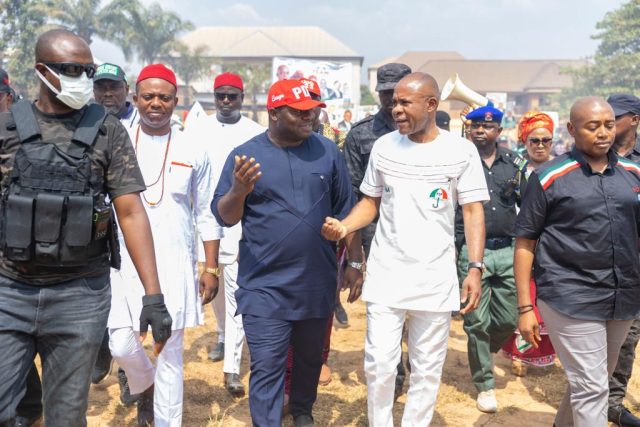 The governorship candidate of the Peoples Democratic Party (PDP) in Enugu State, Dr. Peter Mbah has pledged to ensure the activation of dormant oil fields in the state to boost the economy of the state when elected governor in 2023.

Mbah, while noting and commending the official designation of Enugu State as an oil producing given the oil wells co-owned by Enugu, Kogi and Anambra States in the Anambra River Basin, as a good development, promised to bring in foreign investors to fast-track the exploitation of other oil and gas fields solely owned by the state.

“Apart from the OPL 916, which is co-owned, Enugu State has three other oil fields, including OPL 905, OPL 907 and OPL 914. We have the data of the oil deposits in these fields and we would begin to generate revenues from them.

“We equally have a lot of other mineral resources such as limestone, and coal, among others, and we must optimise them for the development of our state” he stated.

Mbah, who restated his determination to build Enugu into a $30 billion economy from the present $4.4 billion, equally promised to invest heavily in education, skill acquisition and vocational training to tackle unemployment, noting that massive job creation remained one of his major multi-pronged strategies to tackle insecurity in the state.

Meanwhile, the people of Enugu South LGA have assured Dr. Mbah of resounding success across the electoral wards in the local government in the 2023 general elections

Speaking, the Council Chairman of Enugu South Local Government Area, Hon. Chimezie Nkwuo, said the people’s faith in Mbah was predicated on his inclusive approach to governance, adding that his decision to hear from the people on their specific needs despite his well-detailed manifesto, was a hallmark of people-oriented leadership.

In the same vein, the President-General, Obeagu Community town union, Chief Andy Egbo, commended Mbah for the town hall meetings, which he described as unprecedented in the history of elections in Enugu Stated, noting that it was a clear indication that he would be an accessible governor.

Deacon Ogbodoobserved that Enugu South LGA had been caught up by urbanisation, which had robbed the LGA of agricultural lands and equally led to emergence of urban slums due to inadequate infrastructure and enormous pressure on the few available ones.

Ogbodo, who described Enugu South LGA as endangered species, however said that Mbah had earned their votes given his comprehensive urban renewal and infrastructural revolution agenda as captured in his manifesto.

Former Leader of Enugu South Legislature, Hon. Ijeoma Nnaji, said the women of the area had decided to line up behind Mbah in the coming elections given his women-friendly manifesto, stating their unflinching faith that he would implement the 35 per cent Affirmative Action when elected to encourage more women participation in governance.

Former Deputy Chairman of Enugu South LGA, Hon. Duke Nwafor, who is an alumnus of the East London University as Dr. Peter Mbah, recalled that Mbah stood out as a student at the university, as his accomplishments and outstanding personality resonate and earn Nigerians respect in the university long after he left the institution.