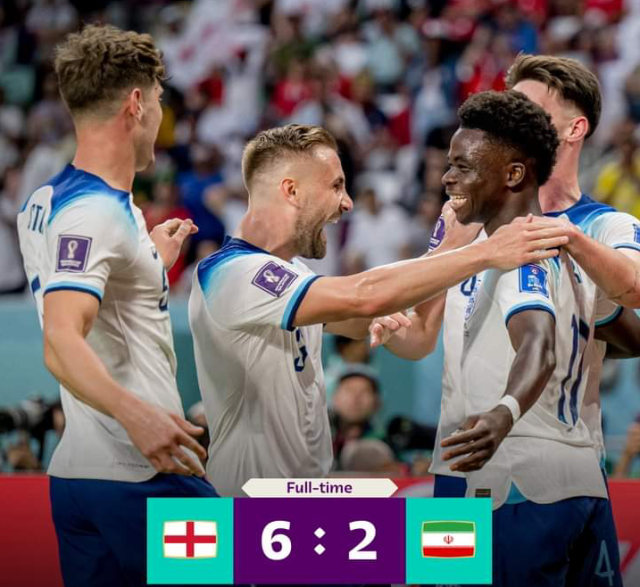 England truly marked their arrival in the 2022 Qatar World Cup with a prolific 6-2 victory over Iran in the opening Group B match.

Here are the Highlights of the FIFA World Cup 2022, Football Match between England and Iran straight from Khalifa International Stadium in Doha:

Mehidy Taremi finally hits the target and beautifully converts the penalty into a goal.

In the dying stage of the game, referee Raphael Claus signals VAR and gives a penalty to Iran.

Even in the last moments of the game, Iran are trying their best to score. Sardar Azmoun gets an opportunity but ends up hitting the crossbar.

As the final whistle is about to blow, England are keeping majority of the possession on the field.

The match between England and Iran ended after a stoppage time of 10 minutes.

Ehsan Hajsafi picked up an injury and medical staff entered the field. He got monitored by the medical team and declared fit to play.

After providing Iran with their first breakthrough, Mehidy Taremi almost created another opportunity but the ball went over the goalpost.

England are experimenting different combinations as they have called back Harry Kane and sent Callum Wilson as his replacement.

Marcus Rashford comes off the bench and makes a massive entry. He perfectly ditches Hossein in the right corner and provides England with another goal.

Harry Maguire has been rested after he picked up an injury. He has been replaced by Eric Dier on the field.

Mehdi Taremi finally gives Iran their first breakthrough, as he brilliantly slots the ball and edges the goalkeeper. Iran eyeing a comeback.

Saka strikes again for England, as the young player perfectly places a shot, which gets deflected and goes straight into the nets.

Morteza Pouraliganji gets penalized for his hard-tackle and gets a yellow card. England’s Harry Kane asks for some medical half, as he picks up an injury.

In the second half, Iran make some changes in their side with Ali Gholizadeh replacing Alireza Jahanbakhsh and Saeid Ezatolahi replaces Ali Karimi.

The second-half of the FIFA World Cup 2022 match between England and Iran, begins at the Khalifa International Stadium.

That’s it for the opening 45 minutes (14+) in the FIFA World Cup 2022 match between England and Iran. The Three Lions have comfortably dominated the proceedings in the first-half with a 3-0 lead. Jude Bellingham, Bukayo Saka, and Raheem Sterling are stars for England.

Jahanbakhsh receives a lofted pass from the teammate but he ends up missing the target, as the ball goes above the goal post.

After taking a 3-0 lead within the first-half of the game, England team are keeping the most of the possession on the field. The stoppage time has been kept as 14 minutes.

As England are completely dominating the proceedings against Iran with 3-0 lead, the teams have been given 14 minutes of stoppage time before the break.

Raheem Sterling provides England with another brilliant goal. Harry Kane brings it into the box, when Sterling places it straight into the nets. England 3, Iran 0 in 45:00 minutes.

Bukayo Saka perfectly turns a corner-kick into another breakthrough for England, as the Three Lions take 2-0 lead before the half-time.

Jahanbakhsh keeping the possession as Iran now look to level the score before the half-time of the game.

Jude Bellingham gets a perfect cross from Luke Shaw as the Three Lions get a 1-0 lead within 35 minutes of the game.

Raheem Sterling had a brilliant opportunity but the Iranian defender takes it away, which gave England a corner-kick.

Bukayo Saka successfully brought from the middle towards the goal but Hosseini makes a brilliant save.

Iran’s Alireza Jahanbakhsh has been given a yellow card by referee, Raphael Claus for bringing down an English opponent.

Ehsan Hajsafi takes the direct free-hit from a comfortable position but England were successful in defending it.

England’s Kieran Trippier interjects an Iranian player, which resulted in a free-kick for Iran.

Things are not going good with Alireza Beiranvand as he has been taken away the medical staff due to a suspected concussion. Hossein Hosseini comes in as the substitute.

After a brief period of time, Alireza Beiranvand is finally back on his feat and all-set to play the game.

Physio is out on the ground as Iran’s Alireza Beiranvand needs some medical treatment. The game has been stopped for a while.

Iran’s team refuses to sing country’s national anthem before World Cup game against England, in the backdrop of the protests back home.

Despite getting a corner-kick, England fail to capitalize it and now Iran keeps the possession on field.

English team takes a knee as the game begins with Iran get the ball rolling.

Both the teams are now out on the field as the game between England and Iran is about to begin.

Just In: Elon Musk’s brain chip to be tried in human beings in six months