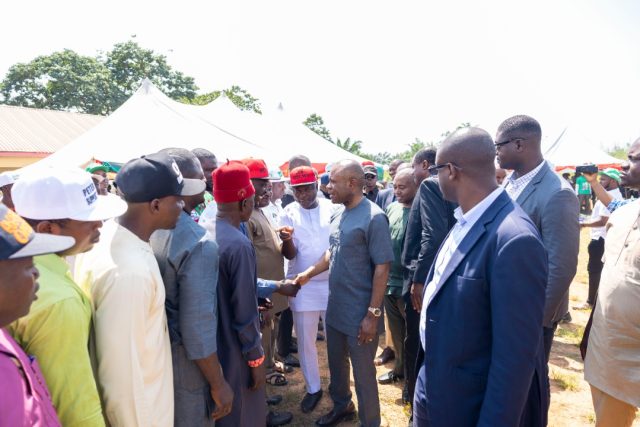 At interactive town hall meetings held on Tuesday in Aninri North and Aninri West Development Centres in Aninri local government area of Enugu State, the people of the area, made up of different communities, have appealed to the governorship candidate of the Peoples Democratic Party, PDP, in the state, Dr. Peter Mbah, to extend the skills and initiatives he used in building the Pinnacle Oil and Gas Ltd from scratch to the topmost global player in the downstream sector of the Nigerian economy to develop Enugu State when he wins the March 2023 governorship election.

The people who described the town hall meetings as the first of its kind since the creation of the state, expressed confidence that the ruling party’s governorship flagbearer will spur economic transformation in the state, expressing confidence that the communities that constitute Aninri council area will benefit immensely from Mbah’s programmes having gone through his robust, people-oriented manifesto.

The town hall meeting, kicked off today at the two development centres, following the unveiling of the PDP Campaign Council in the state by the campaign director general of the party, Chief Ikeje Asogwa, was meant to serve as a platform where community leaders, professional bodies, women organizations, youth organizations, religious bodies, civil society organizations, non-governmental bodies, members of the press, members of the business community, including traders, farmers, artisans, would have the opportunity to present their needs to the gubernatorial candidate and what they should expect on his assumption of office in 2023.

Members of the various communities who took turns to address Mbah on pertinent issues confronting them, said they believed in the industrialist’s sincerity purpose to work and deliver a better Enugu State to the people.

Speaking at the interactive sessions, which drew the presence of large numbers of the grassroots’ dwellers, the Chairman of the local government area, Hon. Benneth Ajah assured his people that Mbah was prepared to work for them having left his comfort zone at Pinnacle to change the narrative in the state.

Underscoring how the Pinnacle Oil and Gas Ltd’s Chief Executive Officer was able to transform the downstream sector through his radical innovative drive, the council boss urged him to do the same thing in the state as the citizens were eagerly waiting to vote for him.

A House of Assembly member representing Aninri State Constituency, Hon. Chinedu Okwu, while assessing the state of development in the area, commended the PDP for providing the platform for the giant strides and development the people had witnessed over the past years, saying new roads and other infrastructures were made possible through the efforts of Senator Ike Ekweremadu, Hon. Toby Okechukwu and the state government.

He, however, called on Mbah to look at the state of the feeder roads, healthcare system and education in the area, stressing that they needed to be upgraded.

Describing Nenwe and Oduma communities as housing influential leaders in the state, Okwu said the only language know to them is, PDP.

On his part, the PDP candidate for Enugu West senatorial zone, Engr. Osita Ngwu stated that Mbah had presented the best and only acceptable manifesto in the state whose message they had already taken down to the people at the grassroots. He further appreciated the governorship hopeful for finding it worthy to commence his town hall meetings in the zone.

In their separate speeches, Engr. Magnus Edeh, the PDP candidate for House of Assembly in the council area, Hon. Okezie Nwanjoku, Mrs. Ann Dolly, Dr. Theodore Odih, Mr Godwin Anyim, Mr. Basil Orji, who spoke for the youths, Igwe Daniel Njoku, Mrs. Angelina Nweze, Comr. Oluchukwu Uchenna, Hon. Chukwu Nonye Okereke, a Senior Special Assistant to the Governor, Hon. Osondu Eze, who spoke for the Presidents General in Nenwe, Chief Ben Alukwu, among others, extolled Mbah’s initiative on the gathering, saying it had afforded them the opportunity to interact and bare their minds on the pressing needs in their communities.

According to them, Mbah, who had started the journey on a good note, will earn their votes and their continued support after the election.

They further called on him to help the communities with accessible water, good healthcare system, youth employment, feeder roads, women empowerment, subsidy in their agriculture, and enhance their schools.

The people who said they were mostly into agriculture, urged the business mogul to provide the enabling environment and facilities such rice mills, storage equipment, to enable them produce in large quantities.

Addressing the issues raised by the communities, Mbah expressed satisfaction at their level of active responses to the meeting, insisting that his plan to give the people a new lease of life through new infrastructures, empowerment, youth and women engagements, construction of new and upgrading of existing hospitals with adequate staffing will be hastened by his administration.

According to him, the town hall meetings became imperative because his government would like to hit the ground running immediately he assumes office, disclosing that despite the manifesto which he had earlier presented, he would want the people to take ownership of the project by being part of the government.

Assessing the value of agriculture in the area, Mbah said although the level of production was sub-optimal, his administration would make agriculture in Aninri the state’s crude oil, contributing 40% of the state’s gross domestic product (GDP).

“In Aninri, we have crude oil in agriculture because you have arable land. Agriculture contributes 40% of our GDP. So, we don’t want to call it agriculture alone but agro-allied industry. It’s no longer going to be subsistence production. We are going to commercial production because will add value to the process.

“We will have agro-allied processing industry that will produce at optimal level. We are going to create a value chain that will scale up our production. We want to make many of our people wealthy from agriculture,” he said.

Mbah further added that he would construct more roads, spanning 10,000 kilometers in the state if elected in the state, while declaring that investment and development would not be possible without good roads first in place. He promised that his administration’s plan in the transportation sector will go beyond roads to light rail transportation system across the state which will make movements of goods and persons easier than the existing state of affairs.

Reiterating that his plans for the state are ambitious, the Pinnacle boss further said new schools with adequately trained teachers will be recruited to give their children the best education, adding that vocational and skills acquisition centres where youths and school children will be engaged will be established.

He promised to partner community leaders, women and youth groups to make sure that all their concerns were addressed with prompt attention, urging them to vote for the PDP as it’s only the party that can make the state a preferred destination for investors, exponentially grow the economy, make Enugu the ICT hub of the Southeast, provide the encouraging environment for “Made in Enugu” products, and turn the state to the food basket of the region with the capacity to feed itself and become a net exporter of agricultural produce through technology.