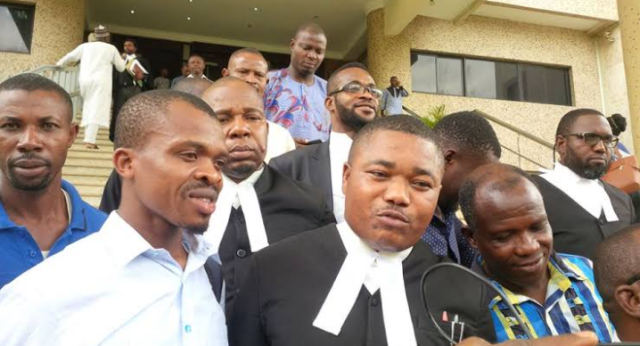 Speaking after the Judgement, IPOB Lawyer, Barrister Ifeanyi Ejiofor stated that the court found the security agencies liable for invasion of his house, killing of his personal assistant, Late Samuel Okoro and subsequently burning of his corpse.

In the words of Barrister Ejiofor “This is a landmark judgement. The federal High Court sitting in Awka ANAMBRA Awka, Per Hon. Justice H. A NGANJIWA, has just delivered judgement in a fundamental Rights Suit filed on behalf of my late PA Mr Samuel OKORO (BIGGY) who was gruesomely murdered and dead body burnt by the police, the DSS and Soldiers”

“The court consequently found the Nigeria Police , the DSS and NIGERIA Army liable for the gruesome murder of Late Samuel OKORO during their bloody invasion of my ancestral home in Oraifite on the 6th day of June 2021
Apart from far reaching orders made in the Judgement, His Lordship granted all Reliefs we sought for , the court also awarded Compensatory and exemplary damages in the sum oof N155M ( One hundred and fifty five millions Naira against them”.

IPOB means Indigenous People of Biafra, a pressure group agitating for recognition and creation of sovereign