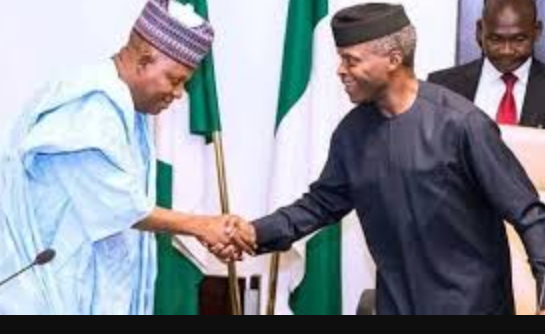 Vice-President Yemi Osinbajo on Tuesday labeled the vice-presidential candidate of the All Progressives Congress (APC), Kashim Shettima, as the chairman of the “Osinbajo Ice Cream company”.

He made the remark on at the launch of a book titled ‘Deputizing and Governance in Nigeria’, which is written by the governor of Kano state, Abdullahi Ganduje.

“…Distinguished Kashim Shettima, who is also the majority shareholder and chairman of the Yemi Osinbajo ice cream company,” the vice-president, Osibanjo who was a special guest of honour at the occasion, jokingly said.

Recall Shettima in June, during the heat of campaigning for Asiwaju Bola Tinubu for the APC presidential ticket, tagged Osinbajo as a nice man who ought to be selling ice cream.

“Osinbajo is a nice man. But nice men don’t make good leaders. Nice men should be selling popcorn, ice cream,” Shettima had said at the time.

Tinubu eventually emerged as the flagbearer of the ruling party ahead of the 2023 presidential election.