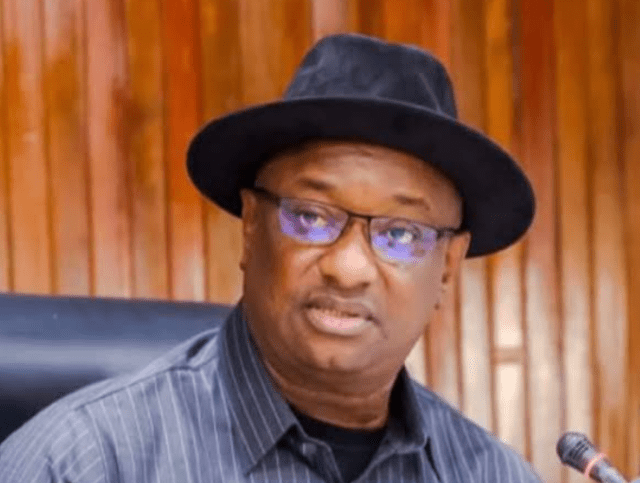 The Labour Party has called on the nation’s service chiefs to place the Spokesperson for the All Progressives Congress Presidential Campaign Council, Festus Keyamo, on the security watch list.

This was disclosed in a statement issued by the National Publicity Secretary of LP, Abayomi Arabambi, and made available to The PUNCH on Tuesday.

The opposition party’s demand was a response to Keyamo’s allegation that the LP presidential candidate, Peter Obi, was planning to fake an assassination attempt and hire some supporters dressed in the APC caps and T-shirts to attack his party offices.

The Minister of State for Labour and Employment had also accused the former Anambra governor of circulating a hate-filled video online to disparage the presidential candidate of the APC, Asiwaju Bola Tinubu.

But fuming over Keyamo’s outburst on Tuesday, Arabambi described his action as a ‘treasonable conduct’ that warranted being placed on the terror watch list by security agencies in the country.

The statement partly read, “President Muhammadu Buhari must now as a matter of urgency directs the service chiefs to place Festus Keyamo and other APC presidential Campaign members and supporters on a security watch list as they are now a threat to democracy ahead of the 2023 general elections.

“I called on the Inspector General of Police to urgently commence a comprehensive investigation into Mr Festus Keyamo unlawful and treasonable activities. His conducts are likely to cause a breach of peace and anarchy in our country if this ugly trend is not nipped in the bud and Keyamo be made to face possible prosecution in a court of Law.

According to the LP national publicity secretary, the APC has become jittery since the Obi’s ‘one million-man’ rallies started recording huge successes across the nation.

He also asserted that the ruling party has started nursing fear of being thrown into the political wilderness.

“LP sees the forced self-confession of the APC about the conspiracy being floated by the APC to assassinate the most popular and supported people’s preferred and loved 2023 Presidential Candidate, as yet another proof of God’s involvement with the Peter Obi candidacy.”

“It is also the responsibility of security agencies to ensure that all the candidates are truly secured. The LP is loudly and clearly expressing its condemnation of the criminally-inclined politics the APC is trying to re-introduce into the Nigerian political system.

“Festus Keyamo’s provocative and highly disparaging insinuation against our Presidential candidate would have been ignored with its puerile contents but it is expedient to set the record straight for the benefits of the public and our party members.

“Labour Party wishes to remind Festus Keyamo that Chapter IV of the Constitution of the federal republic of Nigeria on fundamental Rights section 33(1) states: “Every person has a right to life, and no one shall be deprived intentionally of his life, save in execution of the sentence of a court in respect of a criminal offence of which he has been found guilty in Nigeria,” he stated.

But hours after Arabambi’s call for his arrest, Keyamo released another statement to defend his position.

The APC presidential campaign spokesperson affirmed that after failing to tender an apology to Tinubu over his scathing comment in a viral clip, he is convinced that Obi wants to cause religious crises in the country.

His statement read, “I also call on the security agencies in Nigeria to place Mr. Peter Obi and his some of his demented supporters on the terror watch lists for circulating an incendiary video with a fake message by one of his supporters called Powell Glad Legbe (on his Facebook page) calling on Yorubas not to vote for Peter Obi.

“Mr. Peter Obi then wrongly and wickedly attributed that quote to an amorphous ‘Tinubu group’. Up till now he has not withdrawn his accusation nor has he apologised to our candidate Asiwaju Bola Ahmed Tinubu.

“It is obvious Mr. Peter Obi wants to cause religious crises in the country and for this, I call on the security agencies to place Mr. Peter Obi on security watch or invite him for a thorough investigation. If necessary, I prepared to be invited too as a witness to prove my case against him.”