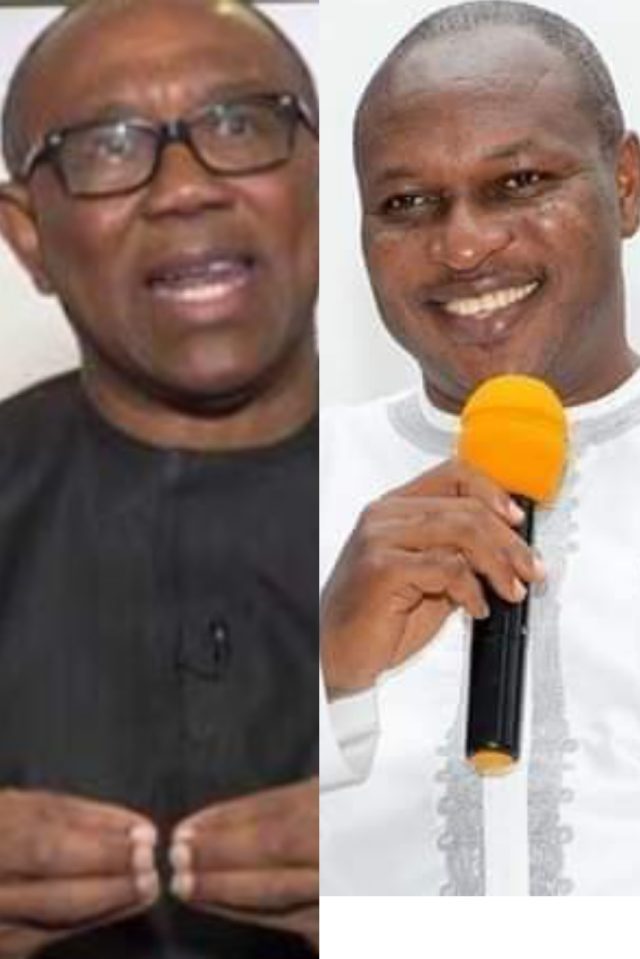 The Governorship candidate of Labour party in Enugu state, Hon Chijioke Edeoga and his running mate, Dr John Nwokeabia, were at the weekend treated to a rousing reception by an Enugu Political pressure Group known as “Achi Political Dialogue’.

The reception was meant to acknowledge the emergence of Dr John Nwokeabia, an indigene of Achi who also is a member of the pressure group, as Deputy Governorship candidate of Labour party in Enugu state.

But, the event was eventually over ran with a demonstration of solidarity for the Labour Party Presidential Candidate, Mr. Peter Obi and Hon Chijioke Edeoga, the party Governorship candidate in Enugu state.

Not minding the short notice of confirmation of the reception, representatives from the twelve villages that make up Achi town with masquerades and cultural dances trooped out to welcome Hon Chijioke Edeoga and Dr Nwokeabia to Achi, describing Labour party as the party to beat both in the Presidential and Enugu state governorship election in 2023.

Speaking at the reception ground within the Palace of late Senator Basil Okwu, Edeoga who was overwhelmed with the mammoth crowd who turned out for his reception, disclosed that his choice of Dr John Nwokeabia as his running mate was purely on merit and a pay back for the numerous contributions of Achi sons and daughters and by extension the entire Oji River local government area in the state politics. Most especially he described Senator Rev Dr Hyde Onuaguluchi as one of his mentors whom he equally consulted before his final decision on Dr Nwokeabia as his running mate.

He also appraised Chief Maxi Okwu as one of the pillars sustaining his political carrier having leveraged with ticket of Alliance for Democracy (AD) to vie for Isi Uzo local government area in 1999, when PDP at the dying minute disappointed him.

Edeoga added that the same fate played out again in the 2023 PDP guber primaries, during which his chances were thwarted even as the records proved that he was clamoured as the most acceptable candidate. Therefore his journey into Labour party to sustain the race.

Edeoga who is optimistic he will win the 2023 Enugu state governorship election, assured that his successor will emerge from the Greater Awgu (Oji River, Awgu and Aninri) axis of Enugu West senatorial district as a way of correcting the lopsidedness of political power against Greater Awgu in the past three decades or thereabout, amidst their huge contributions in the political circle.

The Chairman of Labour Party in Oji River, Dr McGinger Ibeneme assured Edeoga of the maximum support of people of Oji River to his aspiration and other candidates of the party. He described the mammoth crowd that turned up for the reception as mere representatives of Achi people and other nearby communities in Oji River, promising overwhelming crowd when Labour Party campaign team storms Oji River for proper campaigns.

Speaking to news men thereafter, the APDG convener, Chief Maxi Okwu, who was the Presidential candidate of the defunct Citizens Popular Party(CPP) in 2003, said APDG adopted Peter Obi of the labour party as the most credible presidential candidate who possess the intellectual ability to turn around the economy of Nigeria and it’s other socio political problems. Whereas Edeoga if elected as the next governor of Enugu state will make a difference from PDP continued domination of Enugu state.

He stated,””Mkpuke, the brain child of Achi Political Dialogue is non partisan but established with the intention of advancing Socio political interest of Achi, Oji River local government area, Enugu state and Nigeria at large”.

“So far, We have adopted the presidential candidate of Labour party, Mr Peter Obi as the most credible, based on his antecedents even as Labout party has become a national movement across the six zones of the country. .We believe he is the best material to turn around the socio economic and political problems of Nigeria”.

Also, here in Enugu state, We see the candidate of the Labour party, Hon Chijioke Ede and his running mate, Dr John Nwokeabia as the best to advance the economy of the state”

“This is the first time Enugu state will be witnessing opposition against PDP and We are happy for it.We belieeve Edeoga and Nwokeabia will emerge as next governor and deputy governor of Enugu state, to ginger a new economic development of Enugu state”

Edeoga and his entourage paid a courtesy visit to the traditional ruler of Achi, Igwe Godwin Madu and several others before arriving at the famous ” Achi Court” junction where he was received by Achi Political Dialogue Group(APDG) led by Chief Maxi Okwu and was hailed in what appeared as a carnival by various masquerade groups and cultural dances as they marched into Chief Okwu’s compound.