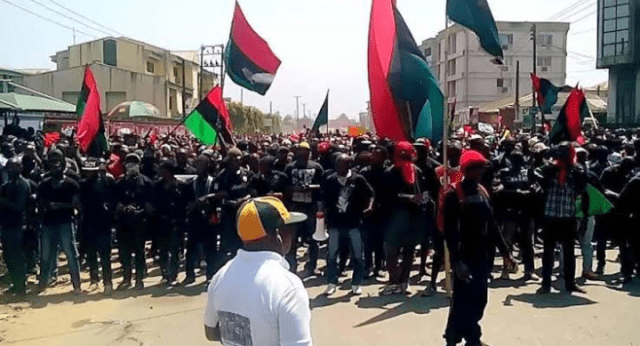 The President, Major General Muhammadu Buhari (retd.), has accused a secessionist group, the Indigenous People of Biafra of vandalising oil pipelines and other infrastructure.

Buhari, who stated this in an  interview with Bloomberg,  said although his regime last year began moves to remove fuel subsidy, it discovered that the moves were not tenable.

IPOB Media and Publicity Secretary, Emma Powerful, in an interview with The PUNCH, dismissed the President’s allegation that the group was vandalising pipelines, describing the claim as laughable.

Founded in 2012 by Nnamdi Kanu, IPOB has been agitating for the restoration of the Republic of Biafra.Kanu, a British Nigerian political activist is a fierce critic of the Nigerian government and also known for his advocacy of the contemporary Biafran independence movement.

On June 29, 2021, the Nigerian government announced that  Kanu had been rearrested. He was subsequently charged to court again and remanded in the custody of the department of state services.

In the interview with Bloomberg, Buhari lamented that criminality was hindering oil production, adding that the country had stepped up its efforts in combating oil theft and vandalism.

He stated, “Criminality and terrorism in oil-producing regions hamper production, and it would help if our western allies designated IPOB as a terrorist group, given their complicity in damage to pipelines and infrastructure.”

He said government efforts in combating oil theft were succeeding

“These efforts are making an impact: wells that had to be closed due to criminality have now re-opened. With these efforts, OPEC has raised our quota for next month.

“We have invested in our security forces, including the $1 billion military deal with the U.S. for the acquisition of A-29 Super Tucano aircraft.

“These efforts are making an impact: wells that had to be closed due to criminality have now re-opened. With these efforts, OPEC has raised our quota for next month.”

Last month, The PUNCH reported that Nigeria was unable to produce about 22.658 million barrels of crude oil valued at N1.22tn in the first quarter of this year due to its persistent inability to meet the crude oil production quota approved for the country by OPEC.

Responding to Buhari’s allegation, IPOB spokesman, Powerful, stated that it was “funny” and “laughable.”

He said the group’s only interest was the actualisation of the “Biafra freedom struggle” and nothing else.

He stated IPOB’s leadership was studying Buhari’s comments and would respond to him appropriately.

A foremost Igbo intellectual body, Akeanga, described as faulty, the demand by the President that the West should designate IPOB as a terrorist group.

“What our western allies are learning the hard way is what looks good on paper and the human consequences are two different things. My government set in motion plans to remove the subsidy late last year. After further consultation with stakeholders, and as events unfolded this year, such a move became increasingly untenable.”

According to Buhari, Nigeria boosting domestic production for refined products would stabilize prices, pointing out that the exchange rate is still susceptible to external shocks that can suddenly and severely affect Nigerian citizens.”