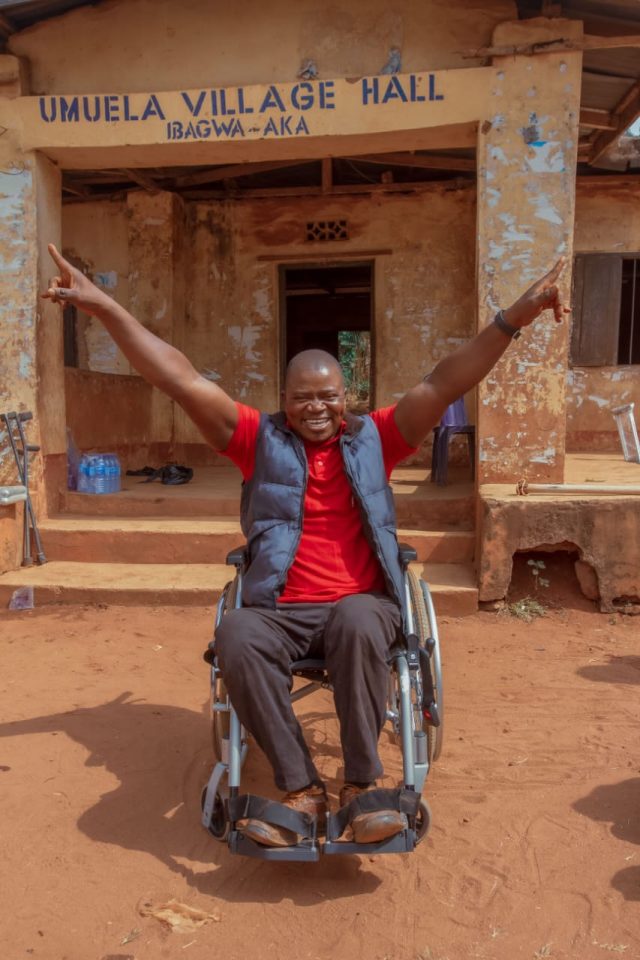 Dr. Edith Ugwuanyi, the deputy governorship candidate of the All Progressives Grand Alliance (APGA) in Enugu State, on Thursday, December 22 reaffirmed the party’s commitment to keep their word and recognise all residents of Enugu State in their plans as she delivered wheelchairs and crutches for People Living With Disabilities (PLWD) as promised a few days earlier by the governorship candidate, Frank Nweke Jr.

Nweke had on December 17, 2022, while in a town hall meeting at Ibagwa in Igbo-Eze South pledged to provide ten wheelchairs and ten crutches to PLWD in the local government area, which he said should be distributed to the most vulnerable amongst them. The pledge followed revelations from the group’s chairman, Nnadi Christian Ikechukwu and a member, Eze Chidiebere, that their members have been neglected by the government and are facing untold hardship.

Apart from making the promise which he has now fulfilled, Nweke had also at the meeting revealed his plans to run an administration that prioritizes social equity and inclusion of every member of society, paying special attention to People Living With Disabilities.

The APGA Nsukka Zonal Chairman, Emmanuel Eze in his remarks noted that APGA is a party that doesn’t leave anybody behind in accordance with its name.

Presenting the items to the PLWD at Umuela Village Hall, Ibagwa-Aka, Igboeze South, on behalf of Nweke, Dr. Edith Ugwuanyi said while he would have loved to make the delivery in person, the governorship-hopeful was pleased to provide some relief to some individuals and help them end the year on a hopeful note.

“This provision is an urgent intervention but there is more to come their way by God’s grace. Our desire is to use the powers of the office of the governor to bring comfort to the common man.”

She urged the group to ensure the equitable distribution of the items according to priority needs as they await for more in due course.

In his response on behalf of the PLWD whose membership is put at over 275, Christian Nnadi said he was brimming with excitement and short of words. He stated that the gesture by APGA had been received with joy amongst PLWD across the state. He revealed that the PLWD were determined to have their interests represented in the government and only Frank Nweke Jr and APGA had given them the assurance.

“I cannot tell you how much this means to me or how difficult it has been to move around. I have tried, unsuccessfully, to raise money many times so this is a life changer for me. I can tell you that it is the same for my friends here too”

Mrs. Omada Veronica with a congenital deformity wept profusely as she sat in her new wheelchair, saying to the team that she never thought she could be remembered by anyone again. She prayed for Frank Nweke Jr adding that for her, Nweke was already the next Governor.

“I am so happy. This is bigger than Christmas rice for me. I can’t explain it. I am someone that likes to work and be able to provide for myself but this life has been hard. To get this wheelchair after I have almost lost hope of anyone remembering me is too good. I thank God and pray that God bless Frank Nweke and APGA. He is my governor.” she said.

Other beneficiaries of the donation include Nnabike Ugwoke, Ugwu Miracle amongst others who expressed joy at the new lease of life and sent goodwill messages for Nweke.

Also present at the presentation were other APGA officials and candidates who made varying amounts of cash donations to Christian Nnadi for the association. These included the Igbo-Eze L.G.A APGA chairman, Samuel Ugwu, House of Representatives candidate, Nsukka/Igbo-Eze South, Hon. Ngozi Ugwu, and the Ezingwu Ward Chairman, Odo Simon I.K., also a Person Living With Disability.