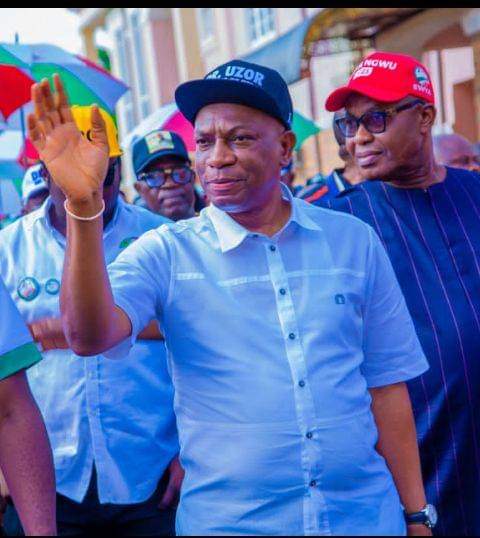 The people of Obinagu Udi in Udi Local Government Area have unanimously assured the candidates of the Peoples Democratic Party (PDP) of their maximum support for the PDP in the upcoming Governorship, National Assembly and State House of Assembly elections respectively.

In his brief remark, the Executive Chairman of Udi LGA and the host, Hon. Nze Philip Okoh thanked the guests for honouring his invitation within a very short notice, which according to him is a symbol of friendship and love for the people of Obinagu Udi. He also thanked the leader of the state, His Excellency, Rt. Hon. Dr. Ifeanyi Ugwuanyi, CON, and the PDP for fielding credible candidates for the elections, stating that the community is a major beneficiary of the PDP led government in the state and would continue to support the party in all ramifications.

He therefore enjoined the people to remain focused and resolute in their support for the party for more democratic dividend.

Other elated members who spoke including the PDP Chairman of Obinagu Udi Ward, Nze Godwin Eneh, reassured the guests of their resolve to vote massively for the PDP in appreciation of its generosity to the community both in human capital and infrastructural developments.

Reacting, the PDP candidates took turns to commend the people especially the stakeholders for their unrelenting support to the party and its leadership, urging them to continue with the good works.

They further appealed to them to ensure that they collect their Permanent Voters Card (PVCs) that are ready for collection at the Council headquarter, maintaining that it is their only ticket to exercise their franchise in the coming elections. They also promised to attract more government benefits to the community if elected.

Earlier on, the team had joined Chief Ugochime and the entire people of Abia town of Udi LGA as he laid his mother, Late Mama Justina Nwaelute Chime to rest in his country home. They also paid a condolence visit to the family of Late Ozo Gabriel Onuzuruike, a PDP chieftain who was gruesomely murdered on Friday, 18th November, 2022, and would subsequently felicitate with Chief Anthony O. Mogboh, SAN on his conferment of an Honorary Doctorate Degree at Godfrey Okoye University, Enugu State.