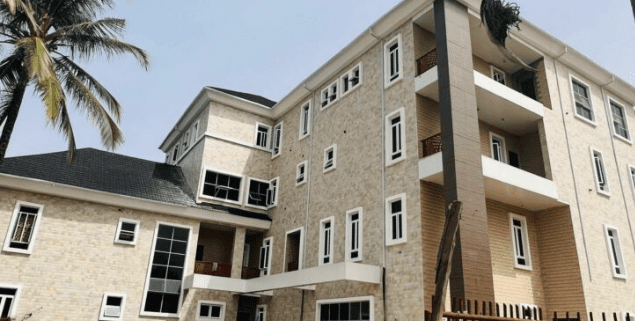 The National Bureau of Statistics, in 2020, ranked Ebonyi State as the fourth poorest state in Nigeria and the least in the South-east, regarding economic development.

Despite a debt figure of over N41 billion, Governor David Umahi of Ebonyi State has built another governor’s lodge in Abuja which he said is valued at N1.2 billion.

Mr Umahi boasted that the lodge is the best in the country.

He stated this on Friday after meeting with President Muhammadu Buhari at the presidential villa in Abuja.

Ebonyi State has a debt profile of N41.6 billion as at 31 March 2022, according to data released by Debt Management Office.

Mr Umahi said he decided to build the new lodge because the existing one in Maitama, Abuja, was not fit enough for him to discharge his duties.

The governor said although he could not give the exact amount the project gulped, he is certain that the cost was within N1.2 billion.

“I wouldn’t be able to say how much it took, but I know it should be under… if it’s up to N1 billion, it cannot be more than N1.2 billion. But when you see it, you will think it is something built with N10 billion. Mark my words, you will not find any other lodge not like that (in Nigeria),” he said.

Asked to comment on the benefits of the lodge to Ebonyi people, Mr Umahi claimed the project would help to build the self-confidence of Ebonyi people and overcome the feeling that they are being marginalised.

“And to some people, we use it to punish those of them that neglect us. They are being punished by this gigantic project. And my projects are projects you can’t find anywhere in the South-east. You can crosscheck that. So, it is punishment,” Mr Umahi said.

Almost all the states in Nigeria have a governor’s lodge in Abuja, which is largely used by state governors and other officials of the state governments for hosting visitors and lodging during meetings in Abuja.

The National Bureau of Statistics, in 2020, ranked Ebonyi State as the fourth poorest state in Nigeria and the least in the South-east, regarding economic development.

When Francis Nwaze, the media aide to the governor, posted photographs of the lodge on his Facebook page on 3 August, some Facebook users criticised the governor’s decision to build the lodge. They said it as a waste of economic resources for a state that was struggling with poverty.

“Ebonyi doesn’t need this. The governor doesn’t live in Abuja. The teeming and unemployed youths in the state need this money invested in their education and empowerment,” said Steve Emmanuel, a Facebook user.

“What a waste of resources! People are dying of hunger here in Ebonyi, and our money is being used to build house …in the name of Ebonyi Lodge in Abuja,” said Solomon Ukpai, another Facebook user.

Apart from the N41 billion debt figure, a report by a civic organisation, BudgIT showed that Ebonyi State was among eight states yet to pay its pensioners in the last six months as at 28 July.

BudgIT said it conducted the survey to spotlight and identify state governments that have “consistently failed” to meet the essential requirements of governance and employee compensation in Nigeria.

Mr Umahi, a member of Nigeria’s ruling party, All Progressive Congress, will exit office as governor in May, 2023.