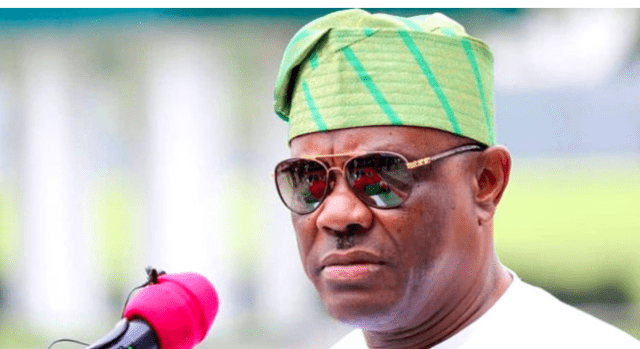 Rivers State Governor, Nyesom Wike has asked security agencies in the state to identify and arrest the owner of a filling station that was recently sealed in Port Harcourt for allegedly trading in illegally refined petroleum products.

Governor Wike gave the directive while speaking at the flag off ceremony for the construction of internal road network in Omagwa in the Ikwerre Local Government Area of the State.

Although the Governor did not mention the name of the owner of the feeling station that was sealed, a current Member of the House of Representatives, Chinyere Igwe has said the filling station, located in the Diobu Area of Port Harcourt, belongs to him.

He alleged that the action which was executed by those he described as police officers from the Rivers State Government House, was politically motivated because of his affinity with the camp of the presidential candidate of the Peoples Democratic Party, Atiku Abubakar, in Rivers State.

A hotel and a bar belonging to two other pro-Atiku politicians have also been sealed.

On Saturday, Wike said the state has spent a lot of funds in fighting the activities of the economic saboteurs and will not relent at this point, no matter the social status or political leaning of anyone involved.

He vowed to deploy all his might against anyone who has benefitted from the state and would turn to work with the enemies of the state.

The Governor referred such people to understand the Russian politics of President Vladimir Putin and his friends, on how anyone who reneges on a deal is treated.

He furiously sounded a note of warning to his former allies who together with him planned the removal of a National Chairman of the Peoples Democratic Party, but are now going to hold meetings with the said former National Chairman in Abuja.

Wike equally warned the current National Assembly candidates of the PDP in the state, not to take the votes of the people for granted, asserting that anything is possible before and after the elections.