The collaboration saw to the distribution of food items such as hundreds of bags of rice, noodles, and cash to beneficiaries from Mgbuji and Abor Ishiala autonomous communities at Eha-Amufu, Thursday. 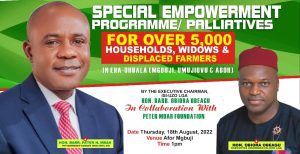 Addressing the elated crowd, the Council Chairman, Obiora Obeagu, acknowledged the many challenges facing Eha-Ohuala communities, especially in the area of security, but assured that the Council was collaborating with the Governor Ifeanyi Ugwuanyi administration to address them.

The Chairman, while presenting the gift items and cash to the beneficiaries, thanked the founder of the Peter Mbah Foundation, Dr. Peter Mbah, for partnering with the Council to provide succour to the people.

“Leadership manifests best in the face of challenges and I must appreciate our Governor for his commitment to finding solutions to the challenges facing us in Mgbuji and Abor Ishiala autonomous communities in Eha-Ohuala in particular and Isiguzo in general.

“On behalf of the people of Isi-Uzo, I also appreciate the founder of Peter Mbah Foundation and our incoming governor, by God’s grace, for coming to our aid in these challenging times.

“Out of the abundance of the heart, the hand gives. If he could be this caring in his personal capacity, it is left to us to imagine how far he could go to improve our fortunes when elected governor, by God’s grace”, Obeagu stated.

While also announcing the approval of the construction of Ebe Mgbuji Bridge and reconstruction of Eha-Ohuala road by Isi-Uzo Local Government Council, the Council Chairman enjoined the people to continue to support his administration, Governor Ugwuanyi, and the PDP, assuring that the empowerment programme was just the beginning of more good things to come.

The beneficiaries eulogised the Chairman for his uncommon leadership and commended Governor Ugwuanyi and Peter Mbah Foundation for their show of compassion, promising to continue to support and pray for them.

The event was witnessed by wife of the Council Chairman, Mrs. Onyinye Obeagu; the Police Area Commander, Mr. Edwin Egwuekwe; the Divisional Police Officer for Isi-Uzo, Mr. Emmanuel Nwancho as well as a host of community and political leaders.