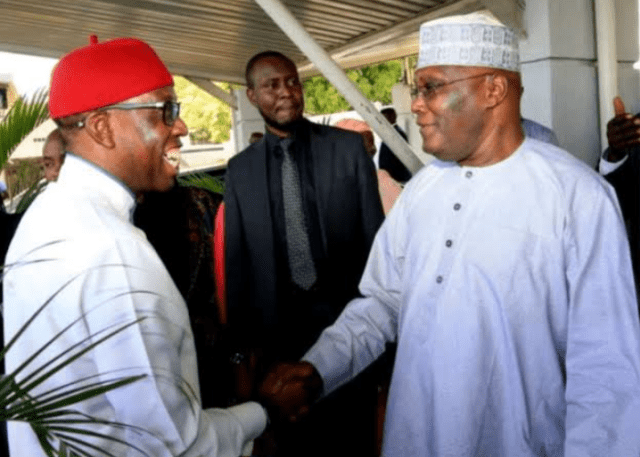 I don’t know when we the Igbo, will learn and appreciate ourselves as beacon of hope not just for Nigeria, but for Africa. I was among the original champions of Nigeria’s president of Igbo extraction. I saw a pathway to the realization of this dream through the PDP. Though not a card-carrying member of the Party, I was disposed to supporting Igbo aspirants that were running for president on the Party’s platform. I supported Mr. Peter Obi throughout, before he party-hopped to Labor and buried all his relationships and affiliation with PDP.

I never had confidence in APC and still do not have any hope in the Party because the Party has no agenda to provide good governance. Their only agenda is to ruin, and they have ruined the country. Whatever they touch comes to ruins, hence I am not ready to exchange one incompetent man with another incompetent, and call it change. Our priority this 2023 will be to vote out APC. The Party is evil.

Of all the political parties, PDP remains the best option for Nigeria. The podium is big and the vessel large enough for the voyage. The presidential candidate of the Party has the leadership skill to lead and unite the country. Atiku is a unifier and I agree with his agenda to unite the country, restore security, fix the economy and provide the kind of education that will equip our youth with the right skills to make them employable. He is also committed to restructuring and devolution of power to States and Local Governments.

I am thrilled by his choice of Ifeanyi Okowa – an Igbo, as his running mate. An action which I believe is wise and deliberate. Addressing the Igbo question comprehensively remains imperative. The choice of Okowa is a good starting point.

The push for an Igbo President of South East extraction collapsed the moment Mr. Peter Obi resigned from PDP. Though I have serious doubts whether Labor Party will trump both APC and PDP in the presidential election, it is at least comforting that an Igbo man will be on the ballot for 2023 presidential election. I acknowledge our excitement but we must be modest in our expectation of the outcome because the vessel is too small for the journey and may not deliver intended objectives.

In this realization, we must not by our own hands destroy the opportunity of producing the number two man, if we cannot produce the number one. The road to the presidency is a journey which we have commenced with Ifeanyi Okowa as a precursor. The worst thing that can happen to us as a people will be the emergence of a South West or North West President in 2023. That will place us in the same equation where we currently are. I am sure we do not want to be left for the next 16 years, in political wilderness. I urge those who are insistent on wasting their votes, not to waste their votes, but vote wisely.

Since after PDP primary election, I have heard several arguments from some of my Igbo brothers saying that despite the investment we have made supporting PDP over the years, that the Party threw us under the bus when it mattered. I for one, do not accept this argument to be true. The North East producing the president is as good as the South East producing the president because we are in the same political tea cup. If we seek justice, we must concede justice, equity and fairness to those who need it too. Rather than be pitted against each other, the North East and the Igbo should forge a strong alliance.

Waziri Adamawa in his wisdom chose Okowa who is an Igbo by identity, though from the South South, as his running mate. We should embrace him. His other options would have been worse for us.

Whether South South Igbo or South East Igbo, the Igbo nation is one. Igbo bu Ofu. We are not the dot some think we are. There is nothing like superior Igbo or inferior Igbo. We must not allow artificial boundaries created by the Nigerian State to divide us. It is silly for any Igbo on account of politics, to deny another Igbo of his/her identity.

The rest of our compatriots are laughing at our foolishness on whether people from Anioma, Ogwashi Ukwu, Asaba, Agbor are Igbo or not. The late Chukwuma Nzeogwu, Achuzia and others of blessed memory who fought side by side with us as Igbo and Biafrans will all be fuming and raging with anger in their graves. I expected Ohaneze by now to have set the record straight.

When Wike said he is not Igbo, we were up in arms against him. We still bear the grudge against him for saying he is not Igbo and we cannot foist an Igbo identity on him. Then here is Ifeanyi Okowa, the only Southern governor that, together with OHANEZE, observed Biafra Memorial Day, reminding us that Igbo does not begin and end in the South East, that there are Igbo in the South South, and here we are questioning his Igboness. If Ifeanyi Okowa from Anioma is not Igbo, who then is Igbo? May be one day when the food is ready, Professor Pat Utomi will be told he is not Igbo. I curse that day.

In case those of us from the South East have forgotten, let me remind us that, it is our duty and obligation to seek out our people in Benue, Kogi, Rivers , Delta and Akwa Ibom States and embrace them as one, for we share a common heritage.

Ifeanyichukwu Okowa is our brother and he is Igbo. If PDP wins, it is a win for us because our brother will become the Vice President of Nigeria and he will be useful to us. That is an important milestone achieved.

We should also be clear on what we want out of Nigeria. So far, the only candidate that has harped on restructuring and competitive economy is Alhaji Atiku Abubakar. All other candidates are avoiding the issue and I wonder why? Nigeria needs to be restructured or she dies. We need a president that understands this basic issue.

From every indication, APC is a failed Party and I do not know how they will convince any sane person that she will get better. We know, where we were between 1999 and 2015. We know the efforts that were made to pull the nation from the brink. While I do not delude myself that any politician is a messiah, but there are those better than others. We must be able to distinguish the golden era, from this era of the locust.

Yes, we feel hurt by the system that has failed us but what we do not need is the canonization of any politician. We do not need a leader with the pretension that he knows it all. What we need is someone with the capacity to hunt the best of talents, and open mindedness to accommodate the best from every section of the country to once again, build back our broken pieces of a nation.

It is not about tribe or religion but about someone with the experience and good heart to understand the basic needs of the ordinary citizen and the fairness of mind to heal our broken hearts. This is why I endorse Atiku Abubakar and Ifeanyi Okowa for President and Vice President of our country, this 2023.