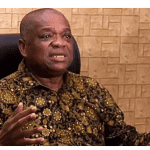 Senator Orji Uzor Kalu, has purchased 5,000 tickets for interested fans who would be available to support the Super Eagles ahead of the Nigeria’s World Cup playoff clash against Ghana on Tuesday, March 29 at the MKO Abiola National Stadium, Abuja.

Kalu, who represents Abia North Senatorial District at the National Assembly, stated this early Sunday morning via his Facebook page, noting that the gesture was through his Orji Uzor Kalu Foundation.

The tickets, he said, will be shared at the entrance to the match venue by 3pm.

According to him, “As an African Pillar of Sports, I look forward to the Eagles putting smiles on our faces by winning the match.”

The Super Eagles battle the Black Stars of Ghana in the second leg of the 2022 FIFA World Cup Qualifiers after Ghana hosted the first leg at the Baba Yara Sports Stadium in Kumasi on Friday which ended in a goalless draw.

The winner or the team with an away goal, in the event of a draw, in the second leg will clinch one of the five slots for Africa at the World Cup which will be hosted by Qatar in November.