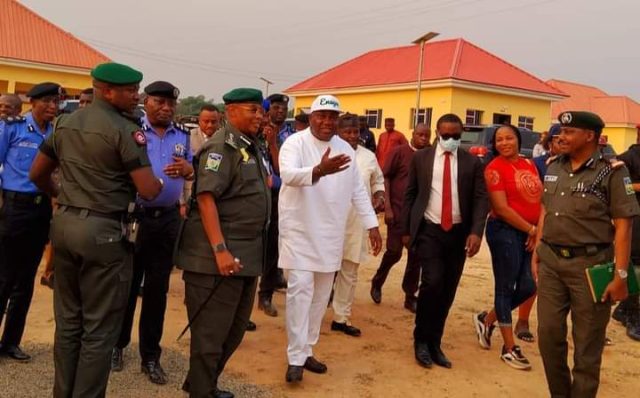 The Inspector General of Police, IGP Usman Alkali Baba, on Wednesday, granted requests made by Governor Ifeanyi Ugwuanyi of Enugu State aimed at assisting the state in tackling existing and emerging security challenges and consequently maintaining Enugu’s enviable status as one of the most peaceful and safest states in Nigeria.

Governor Ugwuanyi had in his address during the inauguration of the 76 Police Mobile Force Squadron, Ekwegbe in Igbo-Etiti Local Government Area constructed by his administration, requested the Inspector General of Police (IGP), Baba, who performed the function, to passionately consider the deployment of the Special Forces of the Nigeria Police Force to Enugu State to help in tackling security challenges in the state.

The governor also requested for the deployment of more units to No. 76 Police Mobile Force, to enhance its manpower base and make it more formidable.

Governor Ugwuanyi equally appealed to the IGP to release back to base, operatives of No. 3 Police Mobile Force who are on special duty in other parts of the country, stressing that “this will further strengthen its manpower base and improve its crime fighting capability.”

The governor went further to request for provision of additional Armoured Personnel Carriers (APC), bulletproof vests, helmets and other protective equipment to help Police operatives in the state to frontally confront and contain unrepentant criminal elements.

He urged the Police Chief to consider the need for the establishment and equipping of a drone section, adding that it will aid the Police in combating crimes, especially those perpetrated in areas with difficult policing terrains.

Governor Ugwuanyi who maintained that his administration is conscious of its primary purpose of ensuring the security and welfare of the people as enshrined in section 14 sub-section 2(b) of Nigeria’s constitution (as amended), pointed out that it has continued to support and encourage the security agencies in the state, particularly the Police force, in their onerous task of providing security.

The governor explained that the newly constructed 76 Mobile Police Force Squadron is one of the several interventions his administration has made in order to improve the security of life and property of all residents as well as visitors in the state.

He revealed that his administration had in the past, executed and handed over to the Nigeria Police Force, Enugu State Command, the construction of main access roads, internal roads and car parking lot at No. 3 Police Mobile Force Squadron, Agbani Road, Enugu; installation of All-in-One 80 watts solar-powered lightings in all Divisional Police Stations in Enugu State; construction and furnishing of new Divisional Police Station at Orba and Emene; and provision of logistics support including operational vehicles and communication equipment.

Describing the inauguration of the 76 Police Mobile Force Squadron as a fulfilling moment for him “given the quantum of our investment in this project, the attendant enhancement of the state’s security architecture and its prospects for improved security of life and property in the state,” Governor Ugwuanyi commended the project contractor, Bonez Construction and Engineering Services Limited for the timely completion of the facility, as well as the staff of the state’s Ministry of Works and Infrastructure for their effective supervision of the project.

He expressed optimism that the operationalisation of the facility, located along Ugwogo Nike-Opi Nsukka road, holds great promise for the improved security of life and property within the state.

In his speech, the Inspector General of Police, IGP Baba, expressed profound appreciation to Governor Ugwuanyi for the laudable project, which he said, provides the Police Force with a conducive working environment to discharge its duties effectively.

He expressed delight at the standard facilities provided at the Squadron for the men and officers of the Nigeria Police Force to discharge their duties accordingly, saying that they are “better facilities.”

The IGP also appreciated the landlord, the Chairman of Igbo-Etiti LGA, Hon. Ikenna Nwodo and all the elders of the host community (Ekwegbe) for donating their land for the facility, stating that the gesture is a testimony to their commitment to security.

Responding to Governor Ugwuanyi’s requests, IGP Baba gave favourable considerations to all the requests, and added more provisions as a mark of appreciation.

“I will give you body armours and helmets; above all, I will give you one APC (Armoured Personnel Carriers). These things will be available for collection immediately after the Christmas break.

“We just established the drone section and we are battling to make it work. As soon as we have been able to establish the one in the headquarters effectively, we will see how we can decentralise and if am on this seat, Enugu will be the first place to be considered,” the Police Chief said.

In their separate remarks, the State Commissioner for Works and Infrastructure, Engr. Greg Nnaji and Chairman of Igbo-Etiti LGA, Hon. Nwodo, reiterated that the actualisation of the project is a testimony to Governor Ugwuanyi’s commitment to the enhancement of security in the state, peace and good governance, and his administration’s policy of “start to finish”.

Speaking on behalf of the host community, Ekwegbe, HRH Igwe Barr. Bartholomew Chiduabor thanked God for the realisation of the project, describing it as the second major development project in their community after the road from Enugu to Nsukka (Ugwogo Nike- Opi Nsukka road) that came into existence at the peak of the civil war.

The royal father expressed gratitude to Governor Ugwuanyi for bringing development to their hitherto neglected community through the facility. He equally applauded the IGP for his support and cooperation.