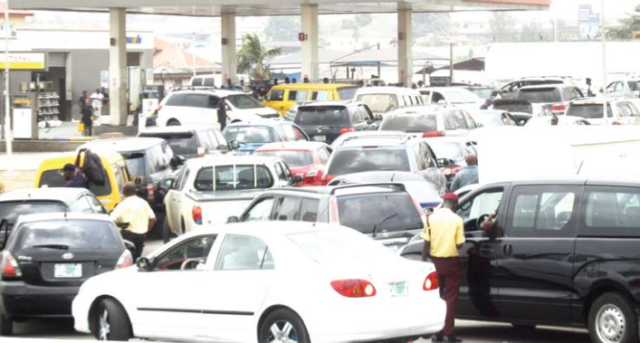 Queues for Premium Motor Spirit, popularly called petrol, which were gradually abating recently, suddenly re-emerged on Wednesday in many cities, including Lagos and Abuja.

The development clearly shows that Nigerians face bleak Christmas as fuel scarcity has started taking a toll on motorists, who have hiked their fares.

It was gathered that many depots were currently running out of the product, a development that reduced supplies from depots to retail stations across the country.

In Abuja, many filling stations, particularly those of independent oil marketers, remained closed due to lack of products, while the few outlets of major marketers that dispensed petrol started witnessing queues from mid-day till evening on Wednesday.

The Conoil and Total filling stations located directly opposite the headquarters of the Nigerian National Petroleum Company Limited witnessed queues on Wednesday afternoon till evening.

Similarly, a filling station opposite Transcorp Hilton Hotel in the Federal Capital Territory started witnessing massive queues in the evening, despite the fact that the gates of the outlet were shut to motorists, as attendants at the station tried to offload a fuel tanker.

Oil marketers told one of our correspondents that the brief period when the queues cleared was basically due to the intervention of the Department of State Services after the DSS ordered the NNPCL to address the situation.

They stated that the order to the NNPCL and marketers made the national oil company to release large volumes of the product but stressed that this only addressed the fuel crisis briefly.

The Secretary, Independent Petroleum Marketers Association of Nigeria, Abuja-Suleja, Mohammed Shuaibu, said there was still PMS supply shortfall from the NNPCL, stressing that the re-emerging queues in Lagos, Abuja and other cities had revealed this.

He said the NNPCL was focusing on city centres of Abuja and Lagos, while neglecting areas that were far away from cities, adding that aside from queues in these areas, the cost of petrol in those locations was higher than N200/litre.

Shuaibu said, “There’s a shortfall in supply but the NNPCL will be telling you not to panic, and that they have products when we cannot see them. Look at our depots, our tanks are empty.

“No petroleum marketer that used his money or borrowed money from the bank to build and invest in a filling station will lock up his station at the end of the day without any cogent reason.”

Asked whether depots in Abuja were empty, for instance, the Suleja Depot, Shuaibu replied, “It is. Any product you see today that comes through the Suleja Depot is by bridging.

“And when you go down south, you’ll be buying from depot owners at a high price. That is why the NNPCL should be held responsible. It should explain why the product is not in circulation.”

Also speaking, the President, Natural Oil and Gas Association of Nigeria, Benneth Korie, stated that a lot of filling stations were currently folding up due unavailability of the PMS to dispense and the challenges associated with accessing the product.

He said, “We are sacrificing a lot by doing this business with losses every day. Go and see the number of filling stations that have folded up in Nigeria. For the depots, how many of them have fuel to sell?”

He stated that the availability of petrol in Nigeria was currently the problem facing operators in the downstream and not necessarily the cost of the commodity.

Korie, however, explained that the cost of the PMS at filling stations operated by major marketers had been below N200/litre because major oil marketers often got their products directly from NNPCL.

“We are all marketers, but it depends on how you get your own product. They (major marketers) get their products from source (NNPCL) and we get ours from them (major marketers). So, don’t expect us to sell less than them,” he stated.

Meanwhile, the NOGASA president pointed out that the hike in diesel price was also impacting negatively on the supply and cost of petrol.

He said, “One major cause for the hike in the cost of petrol and its scarcity is the price of diesel. This is because you use diesel to transport the PMS across the country. The vessels that bring in the PMS use diesel to ferry the product.

“You use diesel to operate depots, filling stations and others. So, this is also a major cause for the high cost of petrol. If you bring the price of diesel down to about N170/litre as it was some months ago before jumping to the current high price, who would sell the PMS at the rate which its being sold now?”

The NNPCL, which is the sole importer of petrol into Nigeria for several years now, has remained mute on the issue of fuel scarcity in Nigeria, despite the lingering crisis nationwide.

Similarly, the Nigerian Midstream and Downstream Petroleum Regulatory Authority, which recently claimed that NNPCL had enough products, had failed to prove this, nor stop marketers from selling petrol at exorbitant pump prices.

The PUNCH observed that fuel scarcity worsened despite the claim by NNPC that it had imported over 2.5 billion litres of petrol, enough to keep the country wet during the festive season.

It was observed that the situation had yet to abate in Lagos as motorists were seen in long queues at filling stations.

Oil marketers told The PUNCH in Lagos that private depot owners kept increasing prices, as petrol was currently sold to filling stations at more than N200/litre depending on the arrangement with each retail outlet.

“Our members don’t have products because NNPCL is not giving us. But for those who have, they go to private depots to buy for over N200/litre, depending on individual arrangement,” the Chairman, IPMAN Satellite depot, Akin Akinrinade, had told The PUNCH.

The association recently issued a seven-day ultimatum to the Federal Government over price disparities, as regards the amount which products were being sold to its members and members of the Major Oil Marketers Association of Nigeria.

Akinrinnade revealed that MOMAN members and depot owners were buying directly from NNPCL at the regulated price of N148/litre, while IPMAN members had to buy from private depots for N220/litre.

Our correspondent observed that filling stations belonging to NNPCL dispensed petrol at N169/litre, members of MOMAN sold theirs at N170/litre, while IPMAN members were selling at about N250/litre depending on the location.

It was observed that many motorists and other fuel users scrambled to get fuel at N169/litre from NNPCL retail stations, thereby worsening traffic gridlock on the expressway.

A reliable source close to the matter, had also hinted The PUNCH that both NNPC and depot owners had vowed to henceforth operate on a “recover all cost” policy.

The spokesperson for the NNPCL, Garba-Deen Muhammad, repeatedly declined to speak on the fuel scarcity issue, despite several calls and messages sent to his official line and email.

Meanwhile, drivers and passengers bemoaned the high cost of fuel and fares on Wednesday, just as the Christmas and New Year celebrations approach, with many citizens preparing to travel out of Lagos and other states.

In December every year, people travel to different destinations to visit their loved ones as they celebrate the season.

However, the current fuel scarcity at filling stations has led to a sharp increase in the fares being charged by transport companies.

While passengers lament the sharp increase in fares, drivers and transport companies blame this on the unavailability of petroleum products.

Our correspondents visited various motor parks across Lagos metropolis where passengers board vehicles to their various destinations outside Lagos.

Passengers at the Alalubarika Park at Berger told one of our correspondents that they paid twice the fare for their journey to Ibadan. One of the passengers, Akibu Falana, said the fare to Ibadan had doubled.

He said, “Although I know that during periods like this transport fares increase, it is not like what we are seeing now. Before now, when I am travelling to Ibadan, the fare used to be between N1,500 and N1,700, but today I paid N3,000 for the destination.

“We urge the government to do something about this scarcity of fuel because it is the main reason why the fares have increased astronomically.”

A driver at the park, Omotola Gaji, said petrol price had jumped to N270/litre, from the N175/litre.