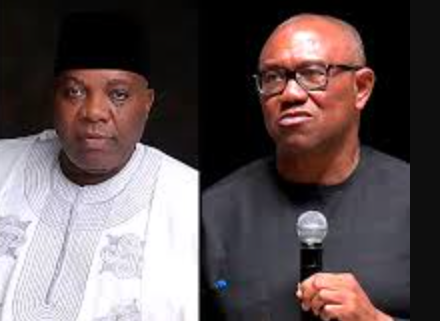 Firstly, Doyin Okupe was NOT convicted of STEALING GOVERNMENT MONEY – please study the conviction with a bit of comprehension. He was Convicted of VIOLATING the Money Laundering Act which provides that no individual or organization shall receive any sum above N5 million and N10 million respectively without passing through a financial institution.

Most Nigerians are guilty of violating this Provision – especially if someone has ever given you over N5 million in Cash whether they are your customers, parents etc.

However, we also can’t deny the source of the money Doyin Okupe received. Part of the money he received (N10 million monthly) was from the scandalous $2.1 Billion Arms deal which he claimed was to enable him run his office and pay his 23 employees. Please know that these funds were approved by the then President Goodluck Jonathan himself according to Doyin Okupe.

So he wasn’t convicted because of those funds he received but he was convicted by HOW he received those funds which was a violation of the Money Laundering Act. The fact people think that he was convicted for stealing money is evidence that Millions of Nigerians do not even know about the Money Laundering Act.
(I’ve shared this information solely to INFORM the ignorant and not to defend Doyin Okupe).

Femi Fani Kayode, FFK, was also charged for the same money laundering after he allegedly received N26 million in cash from Dasuki. But he joined APC and the case has been swept under the carpet.

I am fine with the conviction of Doyin Okupe but I just wish that this isn’t a political witch-hunt against his new party. But whether it is witch-hunting or not, we need a country where the law will respect nobody. We await the conviction of Doyin Okupe’s colleagues now in APC who were charged with the same crime to believe that this is not political witch-hunting against a particular candidate.

I will end this post by calling for the resignation of Doyin Okupe as the Director General of the Obi Datti Campaign Organisation. He has served the organisation but he needs some time to do some introspection at this trying time.

Those attempting to score cheap political points with this conviction should remember that both Tinubu and Atiku are surrounded by people involved in the Dasuki-Gate. Reno Omokri served with Okupe in the same government and ran away from Nigeria to avoid possible Money Laundering charges. FFK was charged by EFCC for the same but he is a leader in Tinubu’s camp so he’s safe. The current PDP chairman allegedly received hundreds of millions from Dasuki.

As an Obidient Nigerian, I call for the immediate resignation of Doyin Okupe. This will establish the fact that Labour Party is truly the new era of Nigeria politics and different from the other two which are filled with the worst class of political vampires Nigeria has ever had.

My name is Charles Awuzie and I believe that the establishment is doing everything possible to frustrate the Obidient movement. They have searched for dirt on the man himself and found none – the closest they could get will be the people in his team but the man Peter Obi is smarter than them. You may think he’s silent but he’s calculating his next move to disarm the establishment.