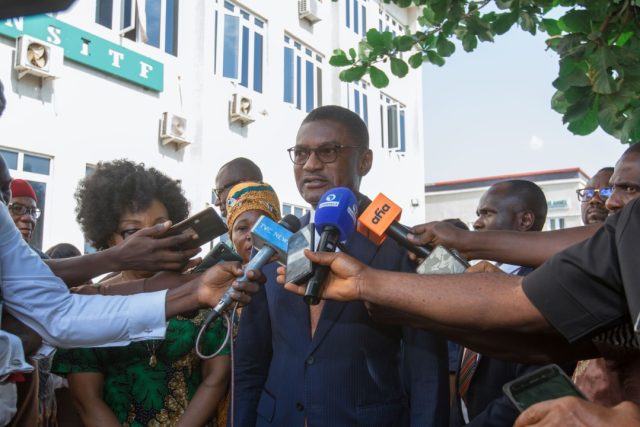 Guber Candidate of the All Progressive Grand Alliance, APGA in Enugu State, Frank Nweke Jr has questioned the use of billion naira received as Security Votes by the incumbent government in the state.

The 2023 APGA Guber Candidate regretted increasing and unabated massive killings in some parts of Enugu state.

Frank Nweke who made his views known through a press statement made available to News Center yesterday, December 19, 2022, expressed dissatisfaction with the fact that Enugu state residents are living in fear.

The Press statement reads “the first duty of government is the security of its people. However, in Enugu State, we are witnessing a consistent breakdown in law and order, with residents living in fear and constant apprehension”.

“The PDP-led administration receives billions annually as Security Vote for thnding security services in the State. Yet, non-state actors seem to have overrun our cities and communities, while the government keeps mum as residents are killed or sacked from their homes in Eha-Amufu, Ibagwa-Aka, Adani, Achi a, and many others in several local government areas across the State. I commiserate with these communities and the families who have lost loved ones and pray that the good Lord will rest their souls”.

“The prevalent insecurity is symptomatic of the abysmal failure of leadership in many respects, including the poor economic conditions our people have found themselves, impoverished, unemployed, and fighting to survive.

“My administration’s overall approach, therefore, will be preventative and infuse Economic Transformation, Human Capital Development, and strategic security measures. We will immediately work to shore up the middle class and lift our people out of poverty.

“However, our core security measures will be deployed in the following ways:

“Restoring the confidence of ndi Enugu in the commitment of the governor to protect her citizens by immediately unblocking the roads that lead to the government house from Day One. I will not barricade myself when my people are getting killed and robbed.

“We cannot continue to watch our economy and social life bleed from the continuous imposition of lockdowns and sit-at-homes by non-state actors. My administration will deploy everything within our power to engage those concerned and reach a resolution.

“Having the political will and courage to effectively deploy the convening powers of the office of the governor to make the difficult decisions and engage the right International, Federal and Local stakeholders towards ensuring security”.

“Set up a functional Enugu State Security Council consisting of the key stakeholders from federal to local levels. This is to ensure close and consistent engagement with all agencies and stakeholders”.

“Prioritise intelligence gathering through traditional and local leaders, a hotline and dedicated digital services and the use of Closed-Circuit Television, CCTVs, within the major cities, communities and at the State borders”.

“Create a special partnership with telecoms agencies to ensure relevant information is shared with the authorities as soon as requested by the government”.

“We will expand support for the statutory security agencies for improved strategic, tactical, and combat operations, providing them with transportation, communication, and other equipment needed to apprehend criminals. We will also provide incentives such as insurance and other life-enhancing facilities”.

“Understanding that the police-to-citizen ratio is below par, we will embrace the presence of the forest guards, and other vigilante groups created by the State and communities to assist in combating criminality. They will be trained by the statutory security agencies and work in collaboration with them toward the fulfillment of the adopted security measures”.

“We will invest heavily in technology, deploying aerial power, geo-tracking technology, drones, and other forms of technology in addressing cases of abductions, ensuring that cases are followed up with immediate effect”.

“We will maintain open communication with the public through a strong media partnership and the administration’s promised quarterly and yearly review for radical transparency and accountability.