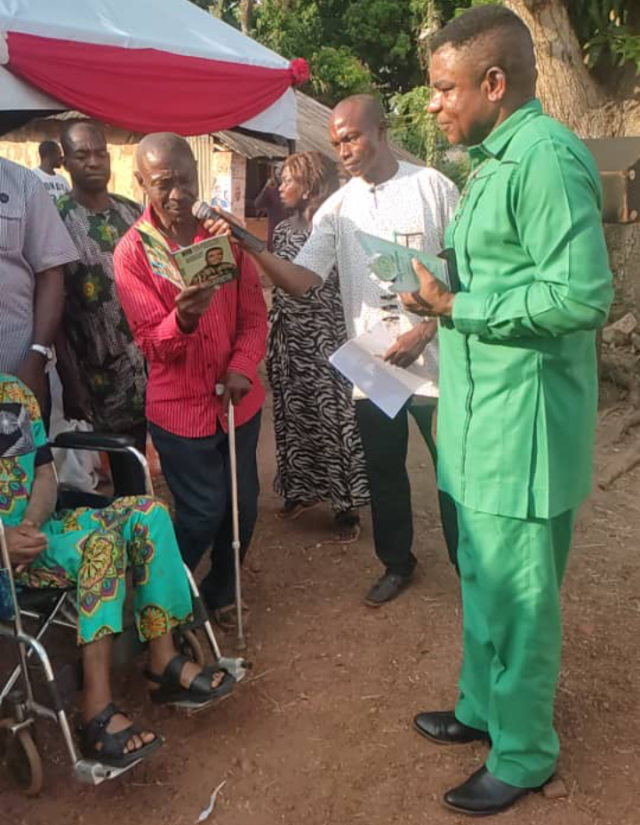 Strictly, disability is a major determinant of impaired health and nutritional status.

Experts, therefore, are swayed by the fact that institutions are controlled by individuals and individual behaviours define the environment and institutions.

Perhaps, it is against the aforementioned premise that the Enugu Governorship Candidate of the African Democratic Congress (ADC) Pastor Donatus Obi Ozoemena mapped out time to celebrate with Persons with Disabilities at Awgu in Awgu Local Government Area of Enugu State, last Sunday.

Indeed, it was a great moment for Pastor Ozoemena as well as his entourage who were warmly received by their hosts led by Chairman of the Joint National Association of Persons with Disabilities (JONAPWD) Awgu Local Government Chapter, Ogbuefi Ifemelumma Gabriel Chukwujike.

The event began with Holy Mass officiated by Rev. Fr. Simon Oguejiofor and was followed by an opening speech, breaking of kola nut and welcome address.

The Chairman of JONAPWD, Chukwujike in his welcome address, said that they set out to celebrate the National Day for Disabilities which he explained was an annual event usually held in December globally.

However, he also listed some of their pressing needs which included mobility, skill acquisition centre, clutches, wheelchairs, brain machines, hearing aids and white canes for the blinds.

If there is any philanthropist at the event who was highly moved by the celebration, it was the ADC flag-bearer, Pastor Ozoemena as he took time to dine and wine with the vulnerable.

But for their barriers, they (hosts) would have “mobbed” Pastor Ozoemena for his prowess in public engagement and human compassion.

To the disabilities, Pastor Ozoemena has been a beacon of hope as he has consistently assisted them financially. Little wonder, they said unequivocally that it is time to pay him back at the polls.

In his motivational speech, the ADC flag-bearer told the audience that he brought a message of hope, urging them not to be driven into despair or see disability as a hindrance to achieve success in life as everyone was created in God’s own image.

“Do not be discouraged by your limitations. We have many high profile individuals in the society who are people with disabilities – PWD. For instance the person leading the great State of Texas in the United States of America is a Person with Disability and on wheelchair and it doesn’t stop him from outperforming most Governors in USA, you see it has not taken away the leadership quality”

On his quest to Government House, Enugu, he recalled, “Sometime ago in a meeting of Ministers of God in the United States of America of which I am a member, I told the gathering that I would be going back to Nigeria to save my people.

“I decided to come back home to carry out the task of rescuing Enugu State people from slavery. I have maintained that my return from the United States of America down to Enugu State is instructed and directed by Almighty God. As a result, not minding the dangers and insecurity, I had to and I still have to obey God’s will.

“So, I am here to change the status-quo in Enugu State. By your joint efforts, if we use our PVCs wisely by voting for credible leaders, we will change the narrative positively. Vote for me, vote for African Democratic Congress, ADC, the party with the handshake logo.

“I assure you that your needs will be adequately taken care of If I am elected as governor of Enugu State in 2023”, he promised.

The high point of the occasion was the conferment of Patron Award on Pastor Ozoemena by the leadership of Awgu chapter of persons with disabilities.