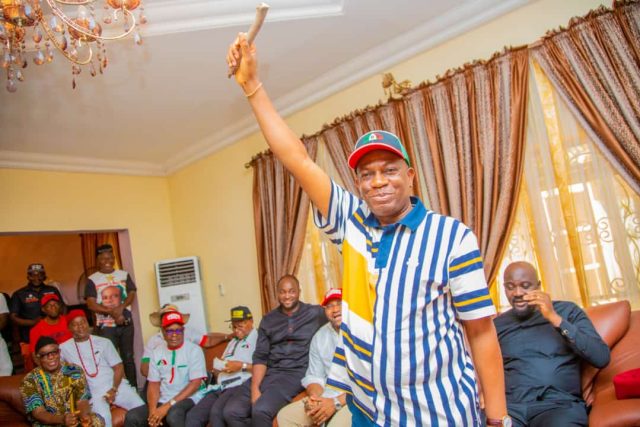 The elated community leaders, said they came to demonstrate their love and solidarity for Dr. Uzor, who’s also the former speaker of Enugu State House of Assembly.

The Leader of the delegation, Surv. John Emenike, said they defied all the challenges to come for the visit because of their love for Dr. Uzor.

Surv. Emenike described Dr. Uzor as a builder of men, adding that they came to assure him of their support in the 2023 poll.

He assured Dr. Uzor that their communities will do the needed grassroot campaign to ensure that their votes count for the PDP.

Also speaking, the Leader of Enugu State legislative assembly, Hon. Agu Wisdom, assured Dr Uzor that the people of Amansiodo ward will vote overwhelmingly for him, because his victory is a victory for all.

The women leader of the PDP in Ezeagu local government, Ngozi Uzoechi who’s also from Amansiodo, thanked Dr. Uzor for restoring peace in their community.

“Amansiodo said you should go ahead, because we’re with you, we love you so much and that’s why we came looking for you because you’ve been so good to us.

“Coming to campaign in our place is a formality because you don’t need to and we will cast our votes for you.”

According to him, “Uzor’s candidacy is accepted to all in our locality and they’re ready to vote for you because we’re confident he will defend their interest at the green chamber.”

Going down memory lane, he told the gathering of how Dr. Uzor facilitated his appointment as an Executive Assistant to the Governor of Enugu State in far back 2002 without any form of protocol and without demanding anything from him.

Dr. Uzor while responding, said Amansiodo has done something different and have decided to be part of building this house by committing their resources and their time in the project.

He said their coming and declaration of support for his election didn’t come to him as a surprise because of his existing relationship with them and he holds them in high esteem.

He assured them that he’s part of them because Amansiodo is his place of birth and he won’t forget them when he’s elected.

He charged them to vote for the PDP all the way, while reminding them that the senatorial candidates, Hon. Osita Ngwu (who stopped by earlier to greet them) appreciates their support.

The highpoint of the event was the donation of campaign materials to the campaign organisation by the leader of the delegation.