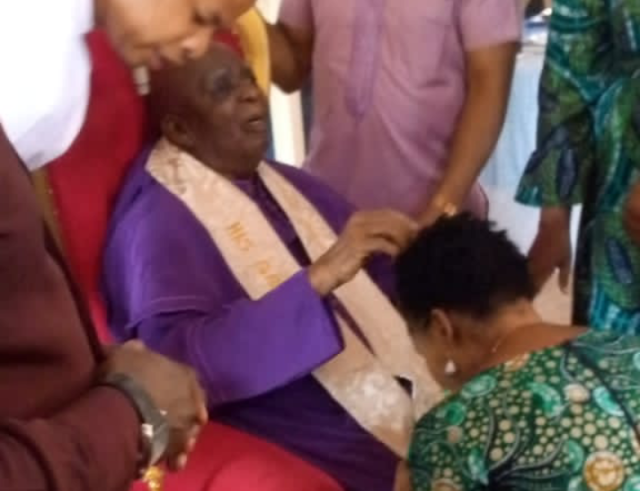 The blessing was unanimous as all bishops and pastors of the Church joined hands with the aged founder in declaring support for Ada Ogbu.

Recall that Ada Ogbu is contesting to represent Enugu East Senatorial Zone in the 2023 general elections.

The 93-year-old spiritual leader of the Church had last week endorsed her candidacy when she visited him. He, however, made a public endorsement on Thursday, where he asked all Ascension faithful to support the Nara-born Princess.

While offering prayers and blessings for the senatorial hopeful, the man of God admonished her to always remember her people, and be the voice of the less privileged, the poor, and the widows.

In his words, he said; “You are the daughter of my dear friend, the great Eze Odenigbo I of Nara ancient kingdom. I hope you will continue the legacy of your father as a good man he was”, he stated, even as the Princess responded in the affirmative.

He continued with his declaration, “God has given you the seat, You will win and become the next Senator of Enugu East Senatorial Zone but when you win, remember your people, remember the poor, remember the widows remember Nara, and unite the people, from today, don’t fight anybody, forgive whoever has offended you, God has assigned an angel to protect and direct you, You will see your enemies, but your enemies won’t see you, go and win your election as I declare you a winner today, so shall it come to pass”.

Present during the endorsement was the General Superintendent of Christ Ascension Church; Bishop Raphael Nwoye, who extolled the good virtues embedded in Princess Ada Ogbu, reminding other clergymen and members of the need to support and vote for Princess Ada Ogbu.

He reiterated that partisan politics have become a thing of the old order, and Personality and Capacity are what the people should focus on now, and Princess Ada Ogbu has all ndi Enugu East needs in a Senator.

To her, he said; “Your father Eze Odenigbo has been a goal-getter and winner, and I know his winning grace runs in the family, you will win”.

He equally passed a word of the declaration on Princess Ada Ogbu and her entourage.

Other clergymen jointly prayed for the Princess and wished her success in the upcoming polls.

Ada Ogbu thanked His Grace for his fatherly blessings, prayers, and admonition, and promised to work on them.

To other men of God present, she assured of her readiness to work for a better Enugu East Senatorial Zone, come 2023.