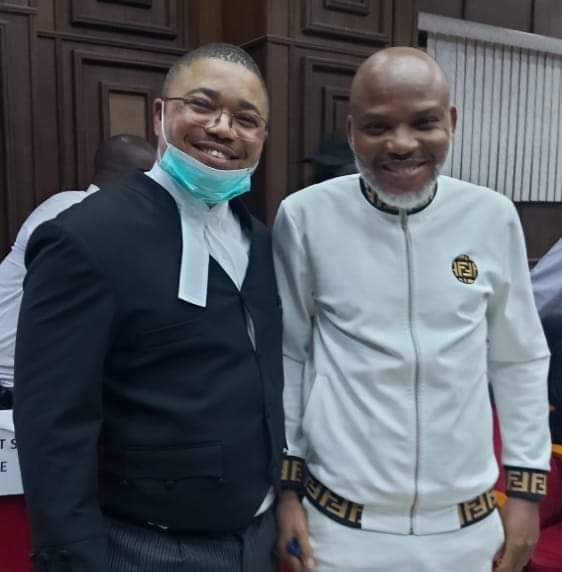 Nigeria Federal Government has been accused of double standard for freeing arrested terrorist kingpin while detaining a freedom fighter.

The Press Statement reads in full:

The selective and lopsided “justice” system in Nigeria is so glaring for even the blind to see.

I just watched a video of Asari Dokubo, a non-state actor, parading with some group of men with assorted guns and ammunition. Imagine for a moment, what would happen if this had happened in the Southeast of Nigeria; or if this was done by someone in any way affiliated with the Indigenous People of Biafra or Onyendu Mazi Nnamdi Kanu.

Recently, we read the news that the DSS had withdrawn the suit it filed against Tukur Mamu, the alleged terrorist negotiator. Meanwhile, the-same DSS is still holding Onyendu Mazi Nnamdi Kanu, who has been discharged by the Court of Appeal since 13th October 2022, and whose further detention was prohibited by the Penultimate Court.

The same DSS, is still holding my innocent domestic staff abducted since the 6th day of June 2021, during the bloody invasion of my ancestral home; and whom the Court has ordered for their unconditional release.

Bello Turji Kachalla, popularly known as Turji, a notorious Nigerian terrorist and bandit leader, is walking around a free man, while Mazi Nnamdi Kanu has been languishing in solitary confinement in the DSS custody for over 17 months, for merely exercising his fundamental rights to self-determination, which is guaranteed by the extant Nigerian Constitution and other international laws, treaties, and conventions.

They may play the ostrich all they want, but the undeniable fact is that there is a separate “justice” system, specifically carved out for people from the south-eastern part of Nigeria. This is a form of discrimination expressly prohibited by the 1999 Constitution, as amended, which we shall challenge before the Court.

The Federal Government of Nigeria must immediately do the needful and release Mazi Nnamdi Kanu in line with the Appeal Court’s pronouncement. And the hour is now!

The Federal Government of Nigeria should desist from romancing with real terrorists, while innocent Biafrans, who are genuinely exercising their constitutionally guaranteed rights to self-determination are being ferociously hunted down, killed and/or dumped in various detention facilities in Nigeria without trial.

The Federal Government of Nigeria must stop selective justice, go after the real terrorists, and release Mazi Nnamdi Kanu as ordered by the Appeal Court.

May ChukwuOkikeAbiama bless all Ezigbo UmuChineke, who have remained resolute and formidable, even in the face of this manifest discrimination and oppression.

The freedom of Onyendu Mazi Nnamdi Kanu is sacrosanct, and the time is NOW!