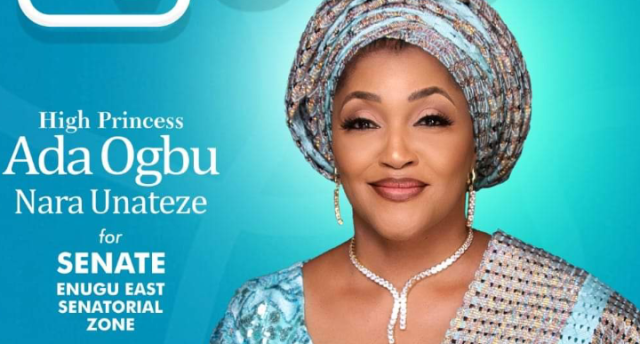 Still in her quest to reach out to the grassroots, interacting and taking notes of their needs in Enugu East Senatorial Zone, the Nara Amazon and the candidate of All Progressives Congress, APC, Princess Ada Ogbu visited the Enugu Tyre Dealers Association.

During the interaction, Ada Ogbu highlighted her mission statement to the Tyre Dealers, which one of them is to go to the red Chambers and be the voice of the traders by instituting laws that will be favorable to them.

The Nara-born Princess continued by saying that she is a trader and knows what is due and good for them. 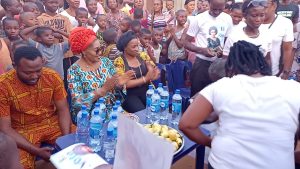 Responding, the chairman of the traders agreed that Ada Ogbu spoke eloquently and promised to give their support.

In continuation of her tour, High Princess Ada Ogbu Nara Unataeze met and interacted with the residents of Iva Valley Road 2, emphasizing the need for her to be their voice at the Red Chambers, noting that with her as their Senator, their welfare will be outrightly protected.

The people of Iva Valley Road 2 who received her with joy, promised to work for the actualization of this project.

Ada Ogbu was also received by residents of Jamborin, in Enugu.

The Princess while addressing the mammoth crowd that trooped out to welcome her pointed out that she has come to offer herself as their voice and chief servant at the Red Chambers, come 2023.

Furthermore, she outlined her antecedence even as an individual and how she was able to facilitate Farmers Grant from the Federal government for Enugu local farmers, amongst other things she has done to savor and ameliorate hardship from her people. While soliciting their support, she guaranteed them an inclusive representation when she becomes Senator.

The Chairman of the area appreciated her, saying they do not take it for granted.

In his words: “The good legacies of your father will speak for you, he was a man well known in Enugu and beyond, who lived a life of positive impact, I pray you will do better than him and I know you will, God will see you through and with what you’ve said you have our support and vote”.