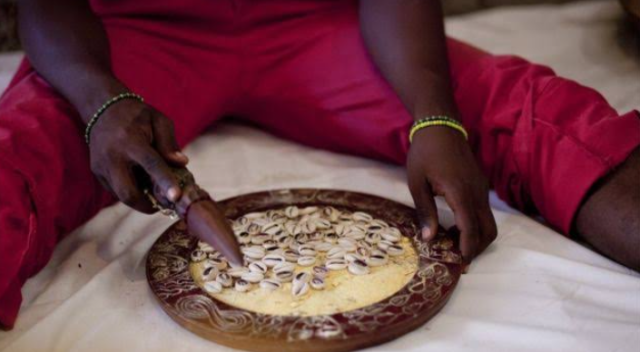 Enugu State Police Command have arrested a Native Doctor and others over murder and related offenses.

The Native Doctor was arrested for killing his own client while testing GUNSHOT protection charm.

The Native Doctor is identified as Odoh Emmanuel (male and a native doctor) aged 23, of Umuaram Village in Ikem community of Isi-Uzo LGA, in Enugu state.

According to the Police, Odoh was arrested for shooting and murdering his adult male client, one Onunze Benedict, of Eha-Amufu community in the same LGA.

“Preliminary investigation reveals that the suspect confessed to having used a locally-fabricated single-barreled gun to shoot and murder the said victim in his shrine at the mentioned location, while testing the gunshot protection charm he had prepared for him” police said.

Police added that “the gun has been recovered, while further investigation is ongoing at the Homicide Section of the State CID Enugu”

Police Operatives of Enugu State Command have arrested a total of seventeen (17) criminal suspects, including one (1) female, for the offences of conspiracy, murder, armed robbery, truck snatching, abduction and unlawful possession of firearm.

Amongst the suspects is a native doctor that shot and murdered his client, while testing the gunshot protection charm he prepared for him. The arrests led to the recovery of two (2) firearms, one (1) live cartridge, three (3) mock guns, a Sino Truck loaded with seven hundred and eighty-nine (789) bags of cement, mobile phones, ATM Cards, pieces of wrappers, clothes and other incriminating exhibits. Below are descriptions of the cases:

2. Acting on credible information, Police Operatives serving in 9th Mile Police Division of the Command, on 24/11/2022 at about 3.20pm, arrested six (6) male suspects in a building along Nsukka/Makurdi Highway, 9th Mile in Udi LGA, and recovered in their unlawful possession, one (1) locally-fabricated double-barreled pistol with one (1) live cartridge. They include: Anigbo Stephen aged 23, Iyere Promise aged 28, Charles Onoh aged 24, Obinna Joseph aged 19, Charles Obilor aged 25 and Ede Chibuike aged 24. Ongoing investigation into the case at the Anti-Robbery Section of the State CID Enugu, has revealed that the sextet, three (3) of whom are linked to a similar case earlier reported, were perfecting plans to commit felonious crimes before they were apprehended.

3. In a different development, on 16/11/2022 at about 11.pm, Police Operatives serving in Isi-Uzo Police Division of the Command, arrested Odoh Emmanuel (male and a native doctor) aged 23, of Umuaram Village in Ikem community of Isi-Uzo LGA, for shooting and murdering his adult male client, one Onunze Benedict, of Eha-Amufu community in the same LGA. Preliminary investigation reveals that the suspect confessed to having used a locally-fabricated single-barreled gun to shoot and murder the said victim in his shrine at the mentioned location, while testing the gunshot protection charm he had prepared for him. The gun has been recovered, while further investigation is ongoing at the Homicide Section of the State CID Enugu.

4. In another development, the following male suspects: Everest Ayokalam aged 48, Anayo Akakem aged 33, Iwuanyanwu Kelechi aged 32, Uchenna Iwuoha (a.k.a “Uchewinde”) aged 47 and Gospel Chimankpa Nnorom aged 32, all of Imo State, involved in the case of conspiracy, armed robbery, abduction and attempted murder, have been arraigned in court and remanded accordingly. They were arrested at Ikeduru in Imo State on 12/11/2022, through the concerted efforts of Police Operatives serving in Isi-Uzo Police Division of the Command and their counterpart in Imo State Command, after acting on credible information/intelligence.

5. The suspects and others at large, armed with machetes and other weapons, had on 09/11/2022 at about 3.am, abducted at Umuhu in Isi-Uzo LGA (a border community between Enugu and Ebonyi States), the driver and conductor of a Sino Truck, said to be loaded with 900 bags of cement and en-route Abakaliki, Ebonyi State. They took them to the forest, beat up and tied them to a tree, and thereafter made away with the truck and bags of cement therein. The suspects confessed to the crime, while the truck was recovered alongside 789 bags of the cement from the warehouse of Everest Ayokalam (the receiver of the robbed exhibits).

6. Also, on 05/11/2022 at about 4.am, a combined team of Police Operatives drawn from Awkunanaw Police Division, Operation Restore Peace and Safer Highway Patrol, with assistance from Neigbourhood Watch Group, arrested one Kasie Ani (male) aged 25, Tochukwu Igwe (male) aged 25, Felix Maduakonam (male) aged 24, Chidera Okoye (male) aged 21 and Jennifer Nwafor (female) aged 17. Their arrest is sequel to the Team’s swift response to a distress call alleging that the suspects blocked the road at the Garriki axis of Enugu/Port-Harcourt Expressway and were robbing travelers. The four (4) male suspects were consequently arrested and the victims rescued, while the female suspect was arrested thereafter, for harbouring one of the male suspects. Exhibits recovered from the suspects includes: three (3) mock guns that they used in the criminal operation, twenty one (21) pieces of wrappers, clothes, phones, ATM cards and other valuables belonging to their victims.

7. The arraignment of all the suspects yet-to-be arraigned shall be done once investigations are concluded.

8. Meanwhile, the Commissioner of Police, CP Ahmed Ammani, fdc, has urged the personnel to remain focused on the fight to flush unrepentant criminal elements out of the State, while soliciting the continued support and cooperation of citizens of the State.