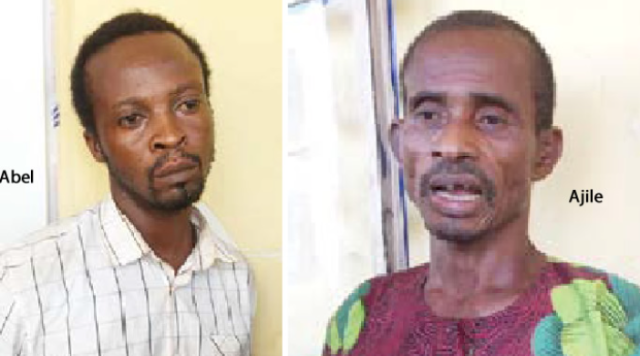 Three suspects arrested by the Ogun State Police Command for the alleged killing, dismembering, and sale of body parts talk to DAUD OLATUNJI about their involvement

Can you introduce yourself?

My name is Idowu Abel and I am 30 years old. I am married with three children and my eldest child is seven years old.

What do you do for a living?

How were you arrested?

I was arrested for the kidnapping and murder of my friend, Muyiwa (Adekunle). We only got to know each other for about two months. He was someone who enjoyed drinking, so we often visited each other. About a month ago, Pastor Ajadi called and told me to come to his place and that was where and how I met Boko, a herbalist. About a week later, Boko called and told me to meet him. He told me he needed a human head, heart, hands, and legs.

What did he tell you he needed the body parts for?

He only said he wanted to use them for a money ritual.

What did he promise to give you in return?

Did you agree willingly to help him get the body parts?

Yes, I did. When I agreed to get the parts for him, I discussed it with Clement, ‘Baba Christy’. When we reached an agreement to carry out the task, Boko gave us an initial payment of N80,000 and we shared it equally, at N40,000 each. After sharing the money with Clement, we planned how to do the job. On November 10, we took Muyiwa to the farm at Ifako where we killed and dismembered his body.

Who was Clement to you?

We knew each other from the same community. We both attended the same school as the pastor.

Were you not bothered about taking a human life when you planned to kill your friend?

I know he will never forgive me for what I have done. When I was killing him, I didn’t feel alright doing it. I was afraid.

Did you become friends with Muyiwa so you could kill him?

No, we had known each other for some time. We often went to a bar to drink alcohol together. We didn’t even choose him (Muyiwa) as our victim; it was just fate that made him the victim.

How did you take him to the farm where you killed him?

We went to a bar to drink alcohol on that day. I was the one who bought the alcohol on that day and I told him that I wanted to go to Ifako, but he said he would follow me since we went out together. When we got there, he had a convulsion that rendered him weak and helpless on the floor. He often had episodes of convulsion whenever he drank alcohol, so it was not new to me. It was at that moment that I killed him. I beheaded him with a machete on Clement’s farm.

What do you think you deserve for what you did?

Well, the Bible is clear. It says anyone who kills by machete shall be killed by machete. However, I don’t know the judgment that will be given to me now but I acknowledge the fact that I am in serious trouble. So, I don’t know what I can do for now.

How are you connected to this case?

My name is Clement Ajile. I am a 50-year-old farmer from Owode in Ogun State. I have a wife and am blessed with four children. I don’t really know Boko (the herbalist) but Abel was close to him. Abel told me that Boko told him he needed some (body) parts like a head, hands, feet and heart. So, I asked him how he planned on getting the human parts for Boko. We agreed to kill his friend on my farm and sever his (body) parts.

He called me when he had taken his friend (Muyiwa) to my farm. I later went to meet them there. It seemed Muyiwa was drunk when I got there because he behaved like someone who had epilepsy. He rolled on the floor unconsciously when I arrived at the farm.

Did you know Muyiwa before he was killed?

No, I am not familiar with him. Abel was close to him. Initially, when Abel told me about the human parts Boko needed, he didn’t know how to get them but since he had given me N40,000 out of the N80,000 Boko gave him, we had no option but to kill Muyiwa.

How much did Boko promise to pay you and Abel for the human parts?

How did you spend your share of the money?

I used my share of the money to fund a burial ceremony my family organised.

How did you kill Muyiwa?

Muyiwa was already drunk before I got to the farm. When I got there, I asked Abel why Muyiwa was rolling on the floor unconsciously but Abel asked me what we were waiting for and then killed him. Abel took the machete and slaughtered him. After Abel had killed him, I took out his (Muyiwa’s) heart and severed his hands and feet. I cut his body open and took out his heart.

Has Boko completed the payment?

No. He told us to come for it the next day but it was the following day that the police arrested Abel. Muyiwa’s family called Abel to inform him that he was missing. It was when Abel went to see the family that he was arrested. He confessed to killing Muyiwa at the police station.

Why I was arrested for ritual killing – Ogun pastor

A pastor, Felix Omosanya, who was arrested by the Ogun State Police Command for the alleged killing, dismembering, and sale of body parts shares his story with DAUD OLATUNJI

Can you identify yourself fully?

I am Pastor Felix Omosanya.

What was your role in the crime for which you and two others were arrested?

I had an accident some time ago and sustained a serious injury which included straining my back to the extent that I could not stand or walk. So, I met a boy called Habeeb. He gave me the herbal concoction I drank when I had the injury in my back, and after drinking the herbal medicine for some days, my back healed. Some months later, I saw him and he apologised for not coming to check on me since I became well. I told him to visit me and that was when he advised me to go for adult education to improve my English because I couldn’t speak good English. That was how we attended the same school for adult education and got to meet Abel as well. They met at my house later. We talked and played for a while before Habeeb said he wanted to go and drink palm wine, but I didn’t follow them because I am a pastor and I don’t drink. That was how Abel went with him and ever since I haven’t set my eyes on any of them.

How were you arrested?

I met a policeman in my area who told me that the divisional police officer wanted to see me, so I followed him. On getting there, I was interrogated by the policemen. They asked me whether I knew anyone called Boko and I told them I didn’t know him. That was before Abel was called out (of a police cell); he explained that Boko was the boy he met at my place. On that note, I declared that I didn’t know him as Boko, but as Habeeb. In fact, I called him my brother, not knowing that they had killed someone. I didn’t know anything about what happened until I got to the police station. Abel just narrated the whole story to me when we got here (to the police station).

What did he tell you?

He said he collected N80,000 from Habeeb to kill someone and bring the human parts. You can ask him (Abel) whether I knew anything about the case. He has been asked at the station as well and he told them I was not a part of the whole story.

Are you an ordained pastor?

What do you know about the murder?

I don’t know anything about it as I said earlier. You can ask him (Abel).

How long have you known Boko?

I only met him when I had the accident about two years ago.

How well do you know Abel?

We don’t stay in the same area. We never attended any event together. We met at an adult school; that was where I knew him. I have known him for three years but never expected anything of such from him. I only went for adult education due to my work which often requires me to speak English. I, however, stopped going to school because I was not catching up. I learnt he trained as an auxiliary nurse afterward. I am grateful to God that he attested to it that I knew nothing about the whole thing (crime). He was asked behind me and in my presence but he said I was not involved in the deal. I am grateful.