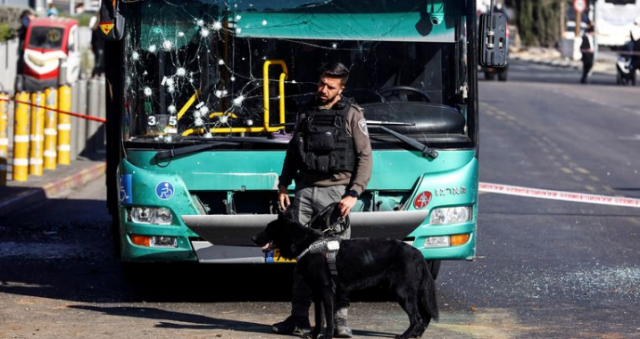 At least one person has died and 14 people have been injured after two explosions at bus stops in Jerusalem in what Israeli police say was a suspected Palestinian attack.

An explosion went off along a highway leading out of the city that is usually packed with commuters, and a second was reported in the neighbourhood of Ramot, north of the city, 30 minutes later.

It comes amid high tensions between Israel and Palestinians following months of Israeli raids in the occupied West Bank and a spate of deadly attacks against Israelis that killed 19 people.

More than 130 Palestinians have been killed in Israeli-Palestinian fighting in the West Bank and east Jerusalem this year, making 2022 the deadliest year since 2006.

The Israeli army says most of the Palestinians killed have been militants. But stone-throwing youths protesting the incursions and others not involved in confrontations have also been killed.

“It was a crazy explosion. There is damage everywhere here, ” Yosef Haim Gabay, a medic who was at the scene when the first blast occurred, told Israeli Army Radio.

“I saw people with wounds bleeding all over the place.”

Israel’s rescue service said four people were seriously wounded in the blasts, with at least 14 injured in total.

The twin blasts occurred amid the buzz of rush hour traffic and police closed part of a main highway leading out of the city, where the first explosion went off.

Video from shortly after the first blast showed debris strewn along the sidewalk as the wail of ambulances blared.

The Islamic militant Hamas, which rules the Gaza Strip and once carried out suicide bombings against Israelis, praised the perpetrators of the attacks, calling it a heroic operation, but stopped short of claiming responsibility.

“The occupation is reaping the price of its crimes and aggression against our people,” Hamas spokesman Abd al-Latif al-Qanua said.

Defamation: Netanyahu to get compensation from ex-Israeli PM