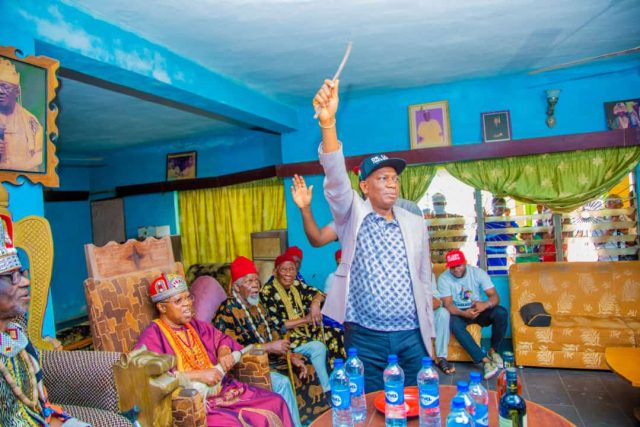 As the 2023 general elections in Nigeria are fast approaching,the people of OBELEAGU UMANA, Ezeagu local government and UMUAGA, UDI local government areas have reaffirmed their determination to cast their votes to peoples Democratic party (PDP) and its candidates in 2023 elections.

The two communities made the statement in a political campaign by PDP candidates, DR FESTUS UZOR for udi/Ezeagu federal constituency. 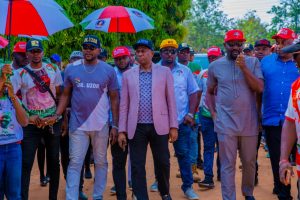 In their addresses on behalf of the community, the President General (PG) of Obeleagu-Umana, Chief Nicholas Ekwo and a PDP chieftain, Chief Dr. Paul Nwabueze Anikwe, reassured the candidates of their resolve to support the party at the polls, stating that the PDP has delivered democracy dividends to the community while urging the candidates to help facilitate the completion of some vital projects in the community when elected, among other demands.

In their separate speeches, the Ward Chairman and the National Youth Leader of Renaissance Youths, Amb. Felix Okolie and Hon. Kenechukwu Anikwe respectively, thanked the guests for coming to interface with them. The youth leader observed that the people of Obeleagu-Umana are predominantly farmers and therefore appealed for the construction of road networks to facilitate easy transportation of farm produce to neighbouring communities. He also emphasized on the enormous economic potentials of the popular Heneke lake situated in the community which according to him, would provide numerous job opportunities for the teeming youths if harnessed.

Welcoming the guests in Umuaga, the President General (PG), Chief Engr. Beltus Onyia thanked them for the visit, maintaining that it was the first time in the political history of the community that aspiring candidates of the ruling party would visit them, a gesture he described as a wonderful development.

In their goodwill messages, the former Chairman of Udi LGA, Chief Hon. Pascal Agu and a PDP chieftain, Hon. Ndubuisi Ngwunweze (Eze-Umuaga) commended PDP for voting for credible and reliable candidates during the primary election stating that the abilities of the candidates to deliver peoples-oriented leadership are never in doubt. They further thanked the party for the numerous projects it has executed in the community and pledged to reciprocate the gesture at the poll.

A major stakeholder in the community and a former SPA, Political to the Chairman of Udi LGA, Hon. Anayo Aneke (Chocho) while welcoming the guests, disclosed the numerous benefits of the community from the PDP led government, stating that its candidates are capable of delivering effective representation.

Responding, the Enugu West Senatorial candidate for PDP, Engr. Osita Ngwu, RG, thanked the people especially the stakeholders for their continued support to the party and the state government, stating that the gesture would not be taken for granted.

He said that he would partner with government at all levels and critical stakeholders to ensure that the various concerns of the people are properly addressed. He further enjoined them to collect their PVCs and use same to reflect their support for PDP in the ballot.

Appreciating the people for their friendship and hospitality, the PDP candidate for Udi/Ezeagu Federal Constituency, *RT. Hon. Dr. F.S.A. Uzor* reiterated his commitment to leverage on the instrumentality of government to deliver good governance to his constituency and beyond.

He maintained that he would approach representation with equity, fairness and justice to ensure that every component of Udi/Ezeagu is carried along especially those that are lagging behind in terms of basic infrastructures and human empowerments.

The PDP candidate for Udi South state constituency, Hon. Okechukwu Aneke (JP) expressed profound appreciation to the people for their unflinching loyalty to the party and its leadership. The former PDP Chairman of Udi LGA assured the people of his usual support, maintaining that Umuaga community is his home, hence would continue to partner with them. He further appealed to them to vote massively for the party for more democracy dividends.

The Enugu West Campaign Council had earlier paid homage to the traditional ruler of Obeleagu-Umana, HRM, Igwe Dr. Patrick Ifo (Ezeanekwu 1 n’ Ezeagu). Also at the palace to receive the guests was the traditional ruler of Etiti Obeleagu-Umana, HRH, Igwe A.B.C. Udeh (Chimereze) and members of their cabinets. The royal fathers prayed God to bless them and grant them resounding victory.