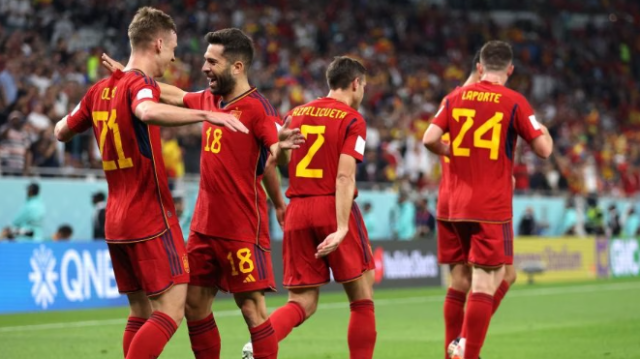 Spain made their mark on the 2022 World Cup with a 7-0 thrashing of Costa Rica and a performance that sent a message to sides backed to win the tournament.

Group E was dubbed the “Group of Death” ahead of the finals, but Spain will have little fear going into their clash against Germany after dispatching Costa Rica with consummate ease, and achieving their biggest-ever World Cup win in the process.

Ferran Torres scored either side of halftime, once from the penalty spot and once from open play, before Gavi netted the pick of the goals and became Spain’s youngest World Cup goalscorer in the process.

Gavi was one of two teenagers selected by Spain boss Luis Enrique, and both he and Pedri were outstanding performers in a team that showed very few weaknesses, as Carlos Soler and Alvaro Morata completed the scoring.

Costa Rica were hoping to maintain their strong recent defensive record after going into the game with eight clean sheets in their previous 13 internationals.

But after a disastrous opener, a tactical re-think may be required for Los Ticos coach Luis Fernando Suarez ahead of a meeting with Japan on Sunday.

The Sporting News tracked live scoring updates and highlights for Spain vs. Costa Rica at the 2022 World Cup. Follow below for complete results from the Group E match in Qatar.

MORE: Youngest players at World Cup 2022, where does Gavi rank?

Spain vs. Costa Rica as it happened, highlights from 2022 World Cup

What an opening statement that was from Spain, who dominated from the first minute to the last and achieved their biggest-ever World Cup win. For Costa Rica, the so-called “Group of Death” is living up to its name.

90th min+2: AND THERE’S NUMBER SEVEN! Alvaro Morata links up with Dani Olmo on the edge of the Costa Rica box and then slides a low, left-footed shot into the corner of the net beyond hapless Los Ticos goalkeeper Keylor Navas.

90th min: SPAIN HAVE GOT SIX! Carlos Soler side-footing into the net after Keylor Navas could only parry Nico Williams’ cross to the feet of the Paris Saint-Germain player. And now we’ve got eight minutes of stoppage time – can Spain get seven?

89th min: Are we in for another heap of stoppage time? This really hasn’t been a game of many pauses, and putting Costa Rica through much more seems cruel. Let’s see what the board says…

85th min: Gavi is the youngest ever player to score for Spain at a World Cup, at just 18 years of age. He has been superb today.

75th min: WHAT. A. GOOOOOAAALLLLL! Gavi with an absolute pearler, meeting Alvaro Morata’s cross with a sensational volley with the outside of his right boot, sending the ball in off the post to make it 5-0 to Spain.

Watch Gavi’s goal here if you are in the US:

68th min: It’s hard not to feel a little sorry for Costa Rica here. They’ve never stopped running and chasing the ball, but Spain’s quality has made it impossible for them to do much more than that. Next up for them in Group E is Japan, who beat Germany earlier today.

63rd min: After Alvaro Morata sends a shot into the side netting, Spain bring on Alejandro Balde and Carlos Soler for Sergio Busquets and Jordi Alba. Some legs being spared ahead of Spain’s clash with Germany on Sunday.

60th min: Just when Costa Rica must have thought it couldn’t get any harder for them, Spain’s natural number nine Alvaro Morata has replaced Ferran Torres. Don’t bet against more goals here.

54th min: IT’S TWO FOR TORRES! And it’s 4-0 to Spain after the former Manchester City man turned Bryan Oviedo and Keylor Navas in the same movement before slotting the ball low into the gaping Costa Rica net. He made that look easy.

Watch Torres’ second here if you’re in the US:

48th min: No let up from Spain here, as Marco Asensio drives a rising shot over the bar from just outside the box. Luis Enrique wants to enlarge La Roja’s lead rather than sit on it, it seems.

46th min: Costa Rica have made a substitution to try and shore up their defence as the second half gets underway, Kendall Waston replacing Carlos Martinez at the back for Los Ticos.

Spain have produced the most dominant first half of football so far at this World Cup and, after racing into a 3-0 lead within half an hour, have been able to slow the game to a relaxed pace while still starving Costa Rica of possession.

Dani Olmo’s smart turn and finish got the goalscoring underway, before Marco Asensio’s side-footed finish doubled La Roja’s lead, and Costa Rica barely had a spell on the ball before Ferran Torres rolled in a penalty after Jordi Alba was brought down in the box.

Will Spain look to shut up shop and sit on this lead or go for more? Either way, they’re playing some delightful football.

45th min+2: We’ve got five minutes of stoppage time here, although for what it’s not quite clear. A short extension of play by this World Cup’s standards, mind.

38th min: Costa Rica had a rare spell of possession in Spain’s half, but for all Jewison Bennette’s endeavour there is no way through the mass of red shirts, and now we’re back to watching Sergio Busquets spray passes around for fun. It’s exhibition stuff from Spain, for the most part.

30th min: FERRAN TORRES MAKES IT 3-0 FROM THE PENALTY SPOT! The Barcelona man rolls the ball into the bottom left corner of the net after Jordi Alba was brought down in the box by Oscar Duarte. Is there any way back into this match for Costa Rica? It looks unlikely at this point.

Watch the penalty incident and the spot kick here if you’re in the UK:

27th min: Whether it’s Gavi, Pedri, Jordi Alba or Ferran Torres on the ball, Costa Rica look unable to cope with the array of talent in this Spain team. The skills on display are wowing the crowd here, and Joel Campbell up front for Los Ticos has barely had a sniff of the ball.

21st min: IT’S 2-0 TO SPAIN! Marco Asensio with a delightful first-time, side-footed finish beyond Keylor Navas after Jordi Alba played him in. This could turn into a romp if Costa Rica don’t tighten up at the back.

Watch Asensio’s strike here if you’re in the UK:

18th min: While Saudi Arabia and Japan have pulled off shock victories over Argentina and Germany, respectively, in the first round of games at this World Cup, this is looking like a mammoth task for Costa Rica. Even when they do pick up the ball in Spain’s half, they are being given precious little space in which to use it.

11th min: GOOOOAAAALLLL DANI OLMO! Spain make the breakthrough after a period of sustained pressure, Dani Olmo latching onto Gavi’s chipped pass and turning on the edge of the six-yard box before flicking the ball past Keylor Navas and into the net. Spain have a deserved 1-0 lead.

Watch Dani Olmo’s goal here if you are in the US:

9th min: CHANCE! Pedri again Spain’s playmaker, squaring the ball to Marco Asensio on the edge of the box but the Real Madrid man sliced his shot, sending it spinning wide to the relief of Costa Rica goalkeeper, Keylor Navas.

5th min: Pedri plays a wonderful weighted pass to the far side of the Costa Rica penalty area where Dani Olmo connects with it, but the Leipzig winger pokes it just wide of the target.

2nd min: We’re underway and Spain, all in red, are knocking the ball around confidently in the early exchanges. La Roja will be hoping to dominate possession throughout their 2022 World Cup opener, having failed to win any of their last three opening matches at the finals.

5 mins from kickoff: The players are out on the pitch and the anthems are ringing around the Al Thumama Stadium. The Costa Rica players are in good voice – plenty of closed eyes and passionate, if slightly tuneless singing. You love to hear it.

Watch the Costa Rica anthem being sung here if you’re in the US:

10 mins from kickoff: In a tournament already full of upsets, Spain will be wary of a Costa Rica side that has lost just one of its last 13 international matches – Los Ticos winning 10 and drawing two in that period.

15 mins from kickoff: Spain are hoping their new generation of talent can inspire them to better fortunes at the World Cup after winning just two of their last seven matches at the finals.

Costa Rica have gone with a solid 4-5-1 system in their 2022 World Cup opener with Anthony Contreras leading the line for Los Ticos.

1hr 30mins from kickoff: Spain begin their 2022 World Cup campaign in just over an hour at the Al Thumama Stadium.

La Roja icon Andres Iniesta was the hero back in 2010 – who will be the 2022 version for Luis Enrique?