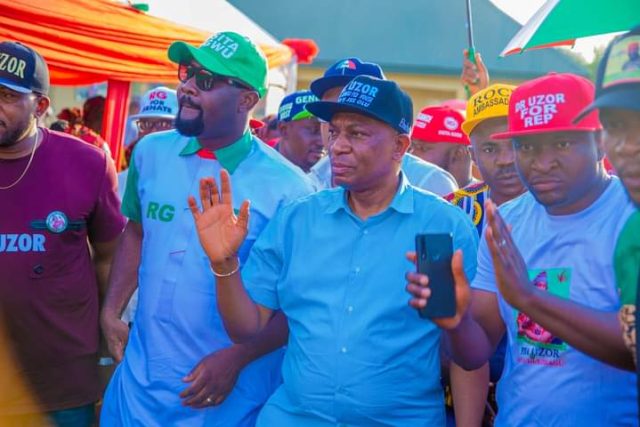 People of Imezi Owa in Ezeagu Local government area have resolved to cast their votes to the Peoples Democratic party, PDP in the 2023 general elections.

The community leaders stated that their decisions were taken in a quest for improved socio-political, and economic development of their area.

The people through their Representatives, town union, women and men organizations, PDP family teachers and other organizations presented their demand to the visiting PDP candidates.

The three candidates were Engr Osita Ngwu who is vying for the Senate, Dr FESTUS Uzor, of EZEAGU and UDI, federal house of Representatives and Barr Chima Obueze of the Enugu state house of assembly.

The people assured them that they are in possession of their voters cards that would enable them to cast their votes to PDP and the three contesting candidates.

Addressing PDP members and eligible voters at Ogwofia Owa, civic centre EZEAGU local government area, the candidate for UDI and EZEAGU federal house of Representatives Dr FESTUS UZOR Commended the people of IMEZI OWA for their large turn out, for the political campaign and assured them that their request from them are genuine demand in a right direction and would do everything humanly possible to make them laugh if he voted.

He observed that the people of Ogwofia OWA have been known for their fruitfulness and sincerity especially when it comes to elections, and assured them to maintain the promises he made to the people during the Campaign.

Also the candidate for Enugu west senatorial zone, Engr Osita Ngwu, expressed happiness when he heard that majority of the people had already obtained their voters cards, awaiting for election days and appealed to those yet to get their PVC to do so, described it as certificate for voting.

Engr Osita Ngwu appealed to the people to vote for PDP and those contesting under the party for better standard of living and to improve the Nations economy.

Also a representative of the candidate for Enugu state house of Assembly, Chima Obieze, Engr Obinna Adibe, said that many people in Ogwofia Imezi Owa had benefited from Barr. Chima Obieze.

Adibe added that democracy dividend would be doubled this time around adding that all the requests made by the community would be communicated to the contestant.

In their separate speeches at the occasion, the party chairman of Ozom ward two, Chief Fredrick Onuwuamaeze and the former Adviser to Enugu state governor on water resources, Mrs Felicia Ikpeama as well as the councilor, Mr Ejike chinwa, all enumerated the problems confronting the people of IMEZI OWA which include, construction and rehabilitation of rural roads, water supply Health facilities, farm input among others.

In their contributions on the individual character of the contestants,
the people described them as good characters, very accommodating, reliable and realistic, the people whose yes are yes and
No are No, and observed that the people of IMEZI OWA are behind them and waiting for feedback after the elections.