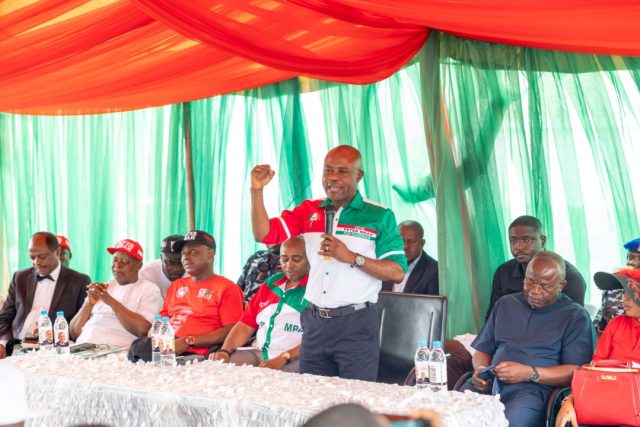 The Peoples Democratic Party, PDP, governorship candidate in Enugu State, Dr. Peter Mbah has promised the electorate and residents of the state of his ambitious economic package geared at driving exponential growth across the state.

Addressing the Forum of Senior Special Assistants and Special Assistants to the state governor, Mbah confidently assured that, coming from the private sector where he was able to change the narrative in different industries, he had come prepared to hasten development in the state.

According to him: “We have what it takes to move Enugu to the next level of development. We have development programmes that will scale up production. The time for the industrialisation of our state is now. There is no more time to waste. There’s no more procrastination. That’s the meaning of our tagline, ‘Tomorrow Is Here’”.

While charging the forum to take the message and good news of his integrated development plans to the people, especially those in the rural area, Mbah declared that it’s a new dawn for the people.

He said the PDP has built massive infrastructure and enhanced development in the state over the past 23 years which the people are enjoying today. He reiterated his commitment to continue to attract new infrastructural developments through his laudable blueprint which will concentrate on agro-allied industrialisation, new energy and mineral resources sector, ease of business doing that will boost productivity, and availability of 100 billion naira seed fund for the youth through venture capital firms.

Mbah, who emphasized the need for aggressive campaign and political sensitisation and education in all the communities in the 17 local government areas, urged the forum to take ownership of the project by converting new members with his well thought-out development programmes.

“Most importantly, you have to inform our people about the exponential growth they are about to witness when we come into office. Agriculture is going to be grown five fold. We are committed to moving the state from a public to private sector-driven economy. This will give our children great opportunity to thrive in the private sector and create wealth.

“So, it behooves on you to take our message of what PDP has done in the past 23 years to the people. It is our duty to inform them that the peace and security they are enjoying is the result of PDP efforts. It is also our duty to bring back the remaining members of our party into our fold.

“Last election, PDP won 95.5% in the state. We can’t afford to allow the record to diminish during your time as SSAs and SAs”, the ruling party’s gubernatorial standard bearer said.

Speaking earlier, the Secretary General of the Forum, Hon. Humphrey Onyima, said the gathering was a form of solidarity for Mbah’s aspiration, stressing that they had already commenced the journey.

Humphrey, who spoke on behalf of other SSAs, stated that they’re capable of delivering their mandate in all the wards, communities and door-to-door sensitisation.

On his part, Hon. Yakubu Chidi, who also spoke for the SAs reiterated that their commitment to the PDP project was in furtherance of their membership of the Ugwuanyi’s government.

“We came to say the reality; to tell you that you have already won the race.

“We have been doing it before and we will keep doing it. The governor has given us the power to deliver you.

“We are the structures in the state, and we have our presence across the rural areas. You’re our project, and it’s our duty to deliver you,” the influential political leader assured.