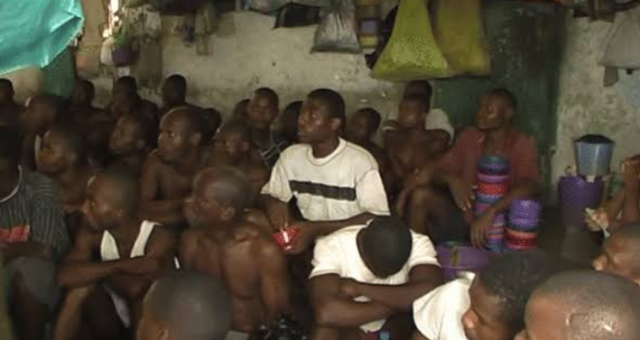 On October 9, 2022, the Federal Government proposed over N22.44bn, for the feeding of inmates across the country.

It was gathered that the money was meant for the supply of catering materials and foodstuffs for the Nigeria Correctional Service in 2023.

The figure, which is part of the Federal Government’s executive proposal in the 2023 Appropriation Bill, also earmarked over N304.39bn for the parent ministry of interior.

Of the figure, the ministry of interior headquarters gets N2.66bn while the Nigeria Correctional Service gets N91.79bn.

The Federal Government’s proposed N22.44bn for the feeding of inmates across the country for 2023 seems very unrealistic as the inmates will still not be fed well. Some inmates, who were in prison at the time their feeding allowance was increased from N450 per day to N750 and N1000, said that despite the increase of the feeding allowance from N750 to N1,000 per inmate, they still don’t feed well.

Some senior lawyers and former inmates spoke to Judiciary Watch on whether it is wise for the Federal Government to be spending so much when more than two-thirds of the inmates are awaiting trial.

A professor of Law, Prof Sam Erugo, SAN, said it is difficult to rationalize in terms of social justice.

He said that though it is the responsibility of the government to cater for prisoners, including awaiting detainees, it is an irony that a Federal Government that cannot afford social benefits of N1,000/day per indigent free citizen, including the elderly, sick and unemployed youth, can afford a budget of that amount for prisoners.

According to him, the challenge is not the budget but the corrupt system that would not let the budgeted sum be utilized for the purpose.

“It’s possible that even the budget is inflated or “padded.” Unfortunately, the issue of awaiting trial detainees has defied half-hearted and corrupt efforts to contain it.

“This is equally traceable to corrupt systems and institutions.  It is unacceptable for Federal Government to be spending so much feeding mostly pre-trial detainees.

“I suggest that Federal Government should rather rethink strategies to reduce the number of pre-trial detainees to save scarce resources,’’ he said.

Erugo suggested that the Federal Government should be sincere in the strategies to achieve the reduction of the inmates, as a simple strategy could be to engage services of the Nigerian Bar Association and then ensure security agencies fully observe the tenets of the rule of law in handling criminal complaints.

“The era of detention at the slightest opportunity to exercise raw state power must be done away with. Security agents must be accountable for every wrongful detention,” he said.

On his part, Mr Victor Opara, SAN, said inmates needed to be fed whenever they are sent to the correctional centres but that the Federal Government needs to interrogate how the money is spent.

Opara stated that there is a need for the government to interrogate the humongous sum allegedly spent on feeding inmates.

“The inmates have human rights and needed to be catered for. The government must ensure the judicious use of monies allocated for feeding inmates.

“Our courts need to utilise alternatives to custodial sentencing in deserving cases to depopulate the correctional centres.

“Minor offenders should be fined, engaged in community service etc and not sentenced to correctional centres,” he said.

The chairman of the Nigerian Bar Association Section on Public Interest and Development Law, NBA-SPIDEL, Dr Monday Ubani, said that not even half of that budget will be used to feed the inmates in the correctional centres.

According to him, someone would rather be in a toilet where there is liberty than to be in a Nigerian prison, noting that it’s worse than the toilet environment.

“The Nigerian prison is dirty, smelling and the condition of those that are there is better imagined than being told. It’s hellish. If you stay there for one week and come out, you will be declared sick if you don’t go for tests and some medical treatment.

“That amount of money ordinarily would have taken good care of them appropriately if we have very decent people running Nigeria.

“As we see in prisons abroad where they eat three square meals per day, they have breakfast, lunch and dinner.

“I heard some Nigerians even prefer to go to prison abroad when they run into very difficult situations over there than return to Nigeria because the condition there is very palatable but not so with the Nigerian prison system or rehabilitation system. It’s the worst ever. So, that amount of money that has been budgeted will not get to the people it is meant for.

“The money is budgeted for them (the handlers). It is not meant for the prisoners; if the money is released, it will be shared among them,” Ubani said.

Another lawyer, Yemi Omodele, stated that corruption is in all sectors of Nigeria and the Nigeria Correctional Service is not an exception.

He stated that the funds released to the correctional centres would be diverted.

Omodele called for the investigation of all the money that has been allocated to the correctional service since 1999 till date.

He said, “I feel for the inmates. There should be a discreet investigation of how money allocated to the correctional service from 1999 to date has been spent. If done, you will see that it is a fraudulent sector.

“If you speak with some of the inmates, it’s as if the government does not allocate a kobo to those centres. The controllers and the non-controllers there are agents of fraud. Have you heard that food and other items donated to inmates by nongovernmental organisations are being diverted by the officials of the centres? Find out. If it is true, what happens to the money?”

An ex-inmate, David Godfery, who spoke on the condition and feeding in Nigerian prisons said a prisoner doesn’t eat food worth N300 a day.

Godfery, who said he spent 14 years and seven months in prison, said the food they eat in prison is not something to write home about.

He stated that the ration of beans they eat every morning is not up to milk cups, adding that what they are served in the prison a dog cannot even eat it.

Godfery explained that they eat beans every morning, half a milk cup of garri and that they only eat rice on Sundays, Tuesdays and Fridays.

According to the ex-convict, ‘’the garri they feed us is spoiled one that the people who fried it probably abandoned but because we don’t have any option we just have to eat it like that.

“People use to think that prisoners eat N500 in the morning, afternoon and evening, there is no such thing there. The only people that brought things for us while I was in prison are churches, mosques and non-governmental organisations.

“They usually brought toothbrushes, clothes, bathing and washing soaps, provisions and other things. The prisons do not give us all these things.

“Even when the churches, mosques and NGOs bring all these things for us, the prison authorities will collect them and give them to those they call the office boys.

“The office boys are inmates who have few weeks or months to leave the prison that they use to clean and do other chores, are the ones they share the clothes and food for.”

“They give more food to the inmates who are in condemned cells but it’s still of the same quality. Their food is more compared to those awaiting trial and serving jail terms or life imprisonment.

Another ex-convict, Chukwudi Iwueke, in his reaction to the amount the Federal Government has budgeted for the feeding of inmates, said he thinks the money is being hijacked somewhere as 90 per cent of the inmates feed themselves.

Iwueke, who said he spent seven years and four months in prison, stated that inmates feed themselves and if they are unable to feed themselves, it’s either they die of hunger or eat the poison they are being served in the prison.

The ex-convict, who was released from prison on April 7, 2022, said in his first year in prison, he suffered because his family and friends didn’t know where he was and there was no one to help him in terms of feeding.

According to him, ‘’we ate porridge beans every morning and if you have a dog, the dog will never smell nor eat the food.”