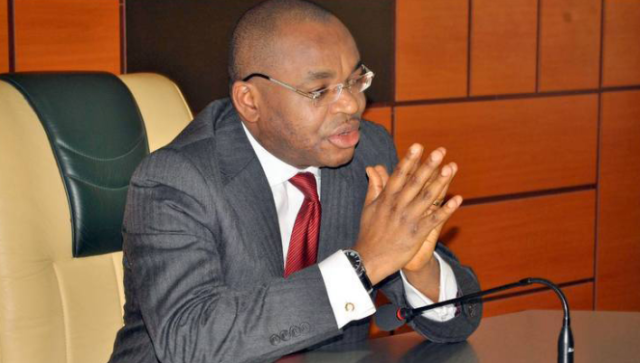 Akwa Ibom State Governor, Mr Udom Emmanuel, has advised the electorate not to allow any politician to deceive them in the forthcoming general election, adding that the Peoples Democratic Party is the only party that is good for the state.

He added that voting for PDP, in 2023 is a sure way to sustain the pace of infrastructural development and capacity building being witnessed in the state.

The Governor said this while addressing a mammoth crowd of PDP faithful Saturday, during the flag-off of the campaign for Akwa Ibom South Senatorial District at the Eket Township Stadium.

He maintained that the lead the state has taken in infrastructure and human capacity building in entrepreneurial development would be sustained if the PDP government is reelected at the various levels of government.

“I stand to be quoted anywhere, there’s no government today in Nigeria that has invested in entrepreneurial development, youth development and capacity building like the present government of Akwa Ibom State.

“Every week, we are graduating people on entrepreneurial skills,” the governor said, adding that the ongoing International Skill Acquisition Centre Project at Ikot Ada Idem in Ibiono Ibom local government area will be another achievement of the state government in the sector.

He disclosed that the State Government, Nigerian National Petroleum Company Limited, and Solutions Hub Limited have completed paper works for the establishment of an onshore logistics base in Ibaka, Mbo LGA to boost the economic fortunes of the state.

He also cautioned the people to be wary of politicians preoccupying themselves with state finance in their campaigns, saying such candidates have no clear-cut agenda for development.

The PDP governorship candidate, according to Governor Emmanuel, has been harping on his blueprint, the ARISE agenda, which clearly shows he has a vision and a plan for the state.

Earlier in his remarks, the State PDP  Chairman Elder Aniekan Akpan thanked Governor Udom Emmanuel for providing leadership and encouraging effective followership in the party and urged the people to cheer up and support the candidates of the PDP to victory.

The PDP governorship candidate, Pastor Umo Eno, expressed appreciation to the people of Eket Senatorial District and described the rally as a homecoming for him.

He assured the party supporters of building on the legacies of Governor Emmanuel, stressing that he will empower the people through his ARISE agenda, which aims at taking advantage of the blue economy of the state to provide jobs and enhance the well-being of the people.

Also, the Senatorial candidate, Dr Ekong Sampson who spoke of the Eket rally as a reflection of the political leaning of the district as a PDP stronghold, explained that peculiar circumstances of the area and the gains of the good governance of the Udom Emmanuel-led government has united them under the PDP, assuring of all-around victory for the party.

In a goodwill message, the political leader of Eket Senatorial District, Chief Nduese Essien, acknowledged the developmental strides of Governor Udom Emmanuel in the state, calling on Pastor Umo Eno to replicate the same upon assumption of office.

He however advised the party faithful to, beyond the rally, take the campaign to their various units and wards to canvass votes for PDP candidates.

Messages of goodwill came from the women, youths and other stakeholders.