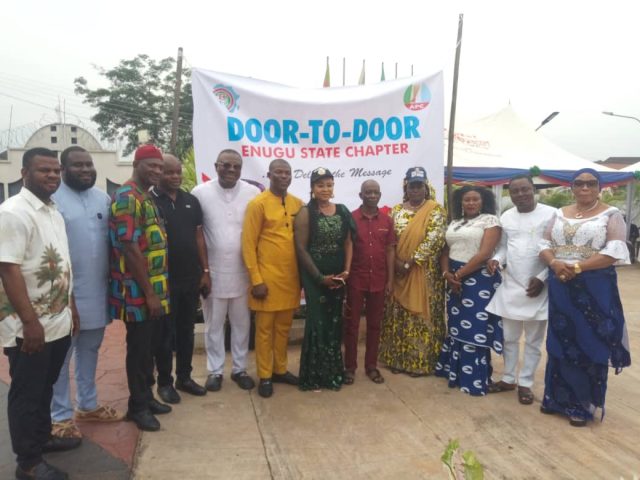 The campaign efforts of the presidential candidate of the All Progressives Congress (APC), Asiwaju Ahmed Bola Tinubu and his running mate, Alh Kashim Shettima, received a boost in Enugu at the weekend with the inauguration of a support group, Door-To-Door Network Initiative in the state to help take the party’s message to the grassroots.

The inaugural event, which took place at the APC Zonal office, Independence Layout Enugu witnessed the surge of party faithful and executives of the support group at the state, local government and ward levels as well as top officials and various candidates of the party in the state.

Speaking at the event, the national coordinator of the Door-To-Door Network Initiative, Hon Harrison Asuguo Sam, said the group was motivated by the desire to ensure the emergence of Asiwaju Bola Tinubu and his running mate, Kashim Shettima, as the president and vice president of Nigeria in 2023.

Asuquo, who was represented at the event by the national women leader of Door-To-Door Network Initiative, Hajiya Zainab Musa Ahmed described the former Lagos Governor, Tinubu as a detribalized Nigerian who believes in capacity development of youths and women.

“Door-To-Door Network Initiative will knock at every door in Nigeria to convince Nigerians to vote for Asiwaju Ahmed Tinubu and Kashim Shettima. Tinubu will replicate the transformation of Lagos to the whole country. He is a nation builder, a philanthropist, a visionary leader, a teacher and hope of the masses,” he said.

The national women leader of the Door-To-Door Network Initiative, Zainab Musa Ahmed also expressed the goodwill and support of the national women leader of the APC, Dr. Mrs. Betta Edu, who she said encouraged the group never to entertain doubt about the success of the project, but to courageously network across the nooks and cranny of the country to drum up support for Tinubu/Shettima.

In his remarks, the Enugu state coordinator of Door-To-Door Network Initiative, and the APC state Organising Secretary, Mr. Moses Emeka Ezeh said that they were not just supporting Tinubu/Shettima ticket and the governorship candidate of the party in the state, Chief Uche Nnaji and his running mate, Barr. George Ogara, but they also see themselves as also contesting for the positions since the success of their principals will also be their success.

“It is because we are in contest that we contributed for this event without external help; we see ourselves as stakeholders, we see ourselves as evangelists of APC, moving door to door telling the people why they should vote for our candidates in the general elections.

“We therefore accept this responsibility with a sense of duty and responsibility and we are determined to take the campaign to the grassroots so that at the end of the day success shall be ours,” he said.

Also speaking on behalf of Chief Uche Nnaji, the guber candidate of the party in the State, the Director General of his campaign organization, Comrade Fidelis Edeh said the issue is no longer whether Ahmed Bola Tinubu would be the next president but how to increase the margin of victory, even as he revealed that the presidential candidate of APC has been part of civil society organizations and rights groups including NADECO that fought the military and ensured the return of the country to civil rule.

The Enugu state secretary of the APC , Hon Robert Ngwu in a speech commended the initiative, noting that it is the duty of every party faithful, and exco members to devote their energy, time and resources to work for the success of the part at all levels in order to partake in sharing the dividends there from.

The event was graced by party chieftains from the state and beyond, including the Anambra State Coordinator of Door-To-Door Network Initiative, Mr. Okelo Madukaife, the Vice Chairman of APC, Enugu West zone, Mr. Alphonsius Nwafor, who represented the state chairman, Barr Ugo Agballah; the House of Representative candidate for Enugu North-Enugu South Federal Constituency, Hon. Mrs. Juliet Egbo among others.