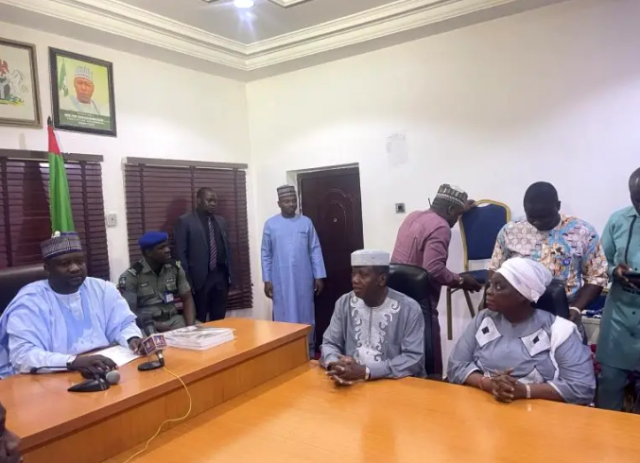 General Overseer, Redeemed Christian Church of God (RCCG), Pastor Enoch Adeboye, has started that prayer remains the best option for peace in Nigeria and an end to Boko Haram insurgency in the Northeast.

Adebayo made this known when he paid a courtesy visit to the Borno Deputy Governor, Usman Kadafur, at the Government House, Maiduguri, on Thursday.

Adeboye said he arrived in the state on Wednesday and led worshippers “to seek the face of God over the state of security and other challenges facing the country.

“A combination of physical and spiritual battle had become necessary to end the menace”.

Adeboye said that “spiritual” intervention was needed side by side the current anti terrorism efforts in order to defeat Boko Haram and other extremist groups threatening Nigeria’s peace and security.

“There are problems that you cannot solve with just human ability, it takes God to get some of these bandits to get to surrender.

“Because even if you offer them everything, some of them may still turn their back and go back to what they were initially doing.

Adeboye explained that Maiduguri was the 16th place where his congregation held prayers.

”We went around the world. The Church was in 196 locations globally.

“Sir, I thank the almighty God for this meeting as this is the first time in my life of visiting Maiduguri. I have had always  wanted to come long before now but somehow it has not been possible.

“My wife and I and some of our officials have come here and seen for ourselves that the governor and his wonderful government have been doing a lot under very difficult situations.

“We believe that if things had been easier this government could have done a lot more for the people.

“In our own little corner at the headquarters  in Lagos, we have tried whatever little bit we could to show the government that we are particularly interested in Borno state,” Adeboye said.

Enumerating some of his church’s interventions, the RCCG leader said, “We built a little primary school, a skills acquisition and vocational training center where different trades like shoe making, sewing and other trades are being learnt.

“We also built accommodation for some of the displaced families and also contributed to the hospitals by bringing machines for kidney dialysis, but much more than that, we have been praying.

“We have been praying because before these troublemakers came, Borno was one of the most peaceful states in Nigeria. I remember in those  days, anyone could go to anywhere here at anytime of the day and night.”

Adeboye noted that the state was known for peace.

”I was particularly touched when the Boko Haram crisis erupted.

“There are problems that you cannot solve with just human ability, it takes God’s intervention.

“The welcome we got in Borno is genuine. Please, express my love and well wishes to our beloved government,” he added.

Speaking earlier, the deputy governor acknowledged the support of Adeboye and other Christian faithful.

He also concurred with Adeboye, saying that there was need to fervently seek the intervention of God to end the 13-year-old insurgency that has ravaged the state.

“We are happy that men of God like you are visiting our state to pray so that God can forgive us and restore peace,”he said.

The deputy governor lauded the church for donating skills acquisition materials, supporting the IDPs, as well as donating a dialysis machine, adding that it would go a long way in uplifting the living standard of the people.