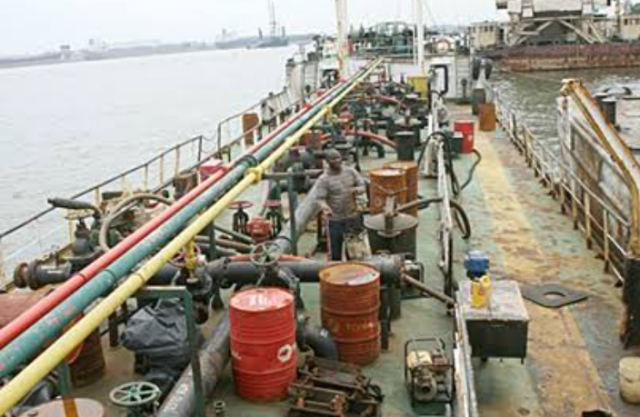 Oil Theft: Managing Director, Nigerian Ports Authority, Mohammed Koko, has explained that rogue ships evade arrest as they switch off their Automation Identification System that displays the vessel’s position and others in the vicinity.

The NPA boss, who lamented that the pilfering and removal of buoys fitted on shipping channels in eastern ports to aid navigation were negatively affecting the maritime safety along the corridors, noted that the Authority was now in the process of procuring Vessel Traffic Services to enable it to identify, locate and monitor all vessels in the nation’s waters.

He added that the Authority had been trying to acquire the VTS for about 10 years, saying that a certified consultant had now been identified to take up the process as he hoped that it could be procured before the end of the current administration.

Koko said, “From intelligence persons bringing in vessels to steal crude, one of the things they do is, they shut down the AIS. This is what is needed in terms of transmission for you not to even know when the vessel comes in and the location they go to. They come in legally but then, they go by the left hand side to commit illegal activities after switching off their AIS.

“We are going ahead to deploy the VTS and to also have information in terms of vessel movement.”

According to him, many shipping companies were refusing to use the ports because of the absence of buoys needed to guide their movements in the waters.

He explained that vandals were attracted to the buoys because some of them had solar panels and sensors and “there is a beacon light there that flashes at night. So the first thing they do is to vandalize that sensor, and then, you just have iron that has no light, and they can just drag it off without the sensors.

“We can monitor it if it is not disconnected. At times, we send in our boats to go round scouting for it. And to also be fair to the communities, we have had some instances where the buoys were naturally taken away by nature. They went adrift, and they ended up on the shore of some communities.

“And to be fair to them, they have actually called us a couple of times to tell us that there was a buoy that has gone adrift and it is in our community. And we thank them for that.”

“We believe probably the communities do not even know the individuals that are involved in these activities. So, we are monitoring the buoys. And that’s how we got to know how many are stolen any day it’s stolen.

“Because the captains are also taking vessels in and out of the water channels, they will naturally know when they can’t find the beacons on the buoys, meaning that something is missing, and they normally report it.”

Despite the challenges, Koko said the Authority was trying its best to make the ports in the Eastern corridor including Calabar, Port Harcourt, Onne, and Warri, attractive to investors, noting that it generated N172.28 billion in revenue in the first half of 2022 and had transferred N92.9 billion into Consolidated Revenue Fund.